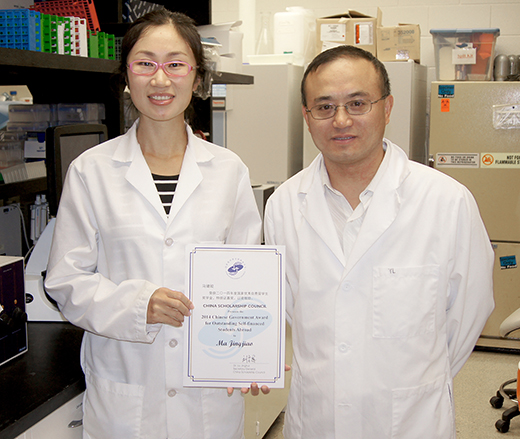 Doctoral student Jingjiao Ma shows the certificate she received for the 2014 Chinese Government Award for Outstanding Self-financed Students Abroad, which is awarded on the basis of her research work and studies under Wenjun Ma, assistant professor of virology. | Download this photo.

MANHATTAN — One-tenth of 1 percent: This is the percentage of students who receive a special scholarship each year from the China Scholarship Council. This percentage now includes Kansas State University's Jingjiao Ma, who is the recipient of the 2014 Chinese Government Award for Outstanding Self-financed Students Abroad.

This nongovernment-sponsored award is made available to about 500 students each year out of an estimated 400,000 Chinese graduate students who are studying overseas.

Ma is a doctoral student in the diagnostic medicine and pathobiology department in the university's College of Veterinary Medicine. She works under the supervision of Wenjun Ma, an assistant professor of virology in the same department. The two are not related.

The $6,000 scholarship award was formally recognized on Sept. 26 at the University of Illinois Urbana-Champaign in Chicago at an awards ceremony.

"Jingjiao received this award for her highly impressive research on the characterization of newly discovered influenza viruses," Wenjun Ma said. "She had to provide a demonstrated publication record during her doctoral studies from August 2011 to July 2015. In this project, novel bat influenza viruses have been comprehensively studied. The technologies and outcomes of the project have been patented, could be used to develop a safer, live attenuated vaccine and have attracted attention from some industrial companies."

"I am very much honored to be selected for this competitive award that recognizes my Ph.D. work at Kansas State University," Jingjiao Ma said. "This will motivate my future career development."

"We're very proud of Jingjiao Ma for her accomplishments as a graduate student under Dr. Ma's supervision," said M.M. Chengappa, head of the diagnostic medicine and pathobiology department. "The quality of her works speaks for itself since that was an important part of the scholarship criteria. We are confident she will enjoy continued success as she works toward her Ph.D."

Since 2003, the Chinese government has been awarding students who are able to study in a foreign country on their own accord. The awards are given to honor students for their ability to study abroad without government-funded sponsorships under the umbrella of the China Scholarship Council. Often, these students study at highly acclaimed institutions where they might face many challenges in being a student in a foreign country.

Awardees are selected based on their research achievements and academic merit after several rounds of judging by invited experts from their field in China as well as their host country. The criteria for the award include the background of the students, research projects, research outcomes, publications, potentiality for future career, and opinion from the student's adviser. Only students with outstanding performances in their doctoral studies are considered by the award selection panel.

The College of Veterinary Medicine