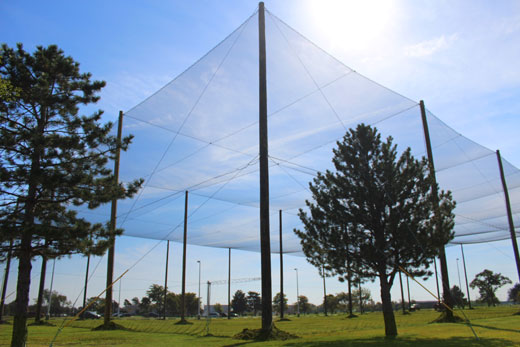 The UAS Pavilion, constructed on K-State Salina's campus, is one of the largest enclosed unmanned flight facilities in the nation. Measuring 300-feet-long by 200-feet-wide and 50-feet-tall, the structure will enable staff and students in K-State Salina's unmanned aircraft systems program to conduct flight training and research within steps of their lab space. Also, the structure connects outside industries to an arena for company training and research.

An official ribbon-cutting ceremony for the pavilion has been planned in conjunction with Westar Energy at 3:30 p.m. Wednesday, Oct. 21, on the K-State Salina campus. Both the media and the public are invited to attend.

Since the program's inception in 2009, all UAS flight activities have had to operate offsite because of the campus's proximity to the Salina Regional Airport. According to rules from the Federal Aviation Administration, unmanned aircraft — sometimes referred to as drones — cannot fly within 5 miles of an airport. The new structure will ensure UAS students and staff can avoid time and logistical challenges by flying onsite.

"This unique facility demonstrates the commitment of the K-State Salina campus to hands-on learning, student success and research excellence in the field of UAS," said Kurt Barnhart, K-State Salina's associate dean of research and engagement. "Unmanned aircraft systems are becoming an increasingly important part of our national transportation system, and this facility is also a further expression of our prominent strength in the field."

The new UAS Pavilion was built in September with the assistance of Westar Energy, Topeka, which has been an industry partner with K-State Salina for a few years. The electric utility company and the unmanned aircraft systems program have been collaborating on applied research and training related to the development of UAS technology in and for the electric power energy sector, primarily consisting of infrastructure inspection.

"The flight pavilion enables us to train employees in safer, more efficient ways to serve our customers, and helps prepare students with the emerging skills they will need in the workforce," said Jason Klenklen, supervisor of transmission maintenance for Westar Energy. "We appreciate K-State's partnership."

Along with the 25 wooden poles donated and installed by Westar Energy, the facility features custom fabricated netting panels on all sides and across the top. With the structure being contained but not completely closed off to outdoor elements, the facility does not block GPS signals on unmanned aircraft and allows flight missions to be conducted in various weather conditions. Because of the facility's size, on-campus location and multiple applications, the overall efficiency of the program's flight operations and the students' educational experience will be increasingly enhanced.

"This facility enables us to offer student training, literally in our own backyard, in an open environment that ensures safe operations with no interference to other campus activities, including manned aircraft operations," said Kurt Carraway, K-State Salina's interim UAS program manager. "We are grateful for our Westar relationship and its interest in helping keep the UAS program at the leading edge of developing this technology."

K-State Salina is the second university in the nation to offer a bachelor's degree in UAS, which began in 2011. Since then, the program has nearly doubled its enrollment every year. The initial degree focused on flight and operations, and in fall 2015, the campus added a second bachelor's degree in UAS design and integration. K-State Salina was the first entity in the United States to be awarded statewide access for unmanned flight operations by the FAA and is a member of the FAA Center of Excellence for Unmanned Aircraft Systems.

Kansas State University Salina and Westar Energy have partnered to build the UAS Pavilion on the State Salina campus. It is one of the largest enclosed unmanned flight facilities in the nation.

"This facility enables us to offer student training, literally in our own backyard, in an open environment that ensures safe operations with no interference to other campus activities, including manned aircraft operations. We are grateful for our Westar relationship and its interest in helping keep the UAS program at the leading edge of developing this technology."
—Kurt Carraway, K-State Salina's interim UAS program manager