MANHATTAN — A Kansas State University researcher is creating a better biological picture of river systems across North America and Asia.

Walter Dodds, university distinguished professor of biology, is part of a collaborative five-year, $4.2 million National Science Foundation project to better understand how climate change affects river systems. The research team — which includes more than 11 researchers from more than nine institutions — wants to study how changes in precipitation and temperature as well as human activities influence river systems in the U.S. and Mongolia.

For his portion of the project, Dodds will gather large-scale biological information on rivers. He will measure the metabolism of nine rivers across the U.S. Great Plains, Great Basin and Mountain Steppes — including the Platte, Niobrara, Humboldt, Bear and Snake rivers — as well as nine similar rivers in Mongolia. River metabolism includes oxygen production and consumption from bacteria, algae, plants and animals in the rivers.

"We really don't know a lot about how rivers function and their biological communities," Dodds said. "What is feeding these rivers? Is it leaves falling or is it algae growing and feeding insects and fish? We hope to find out by gathering these measurements."

While Dodds is measuring the river metabolism, other researchers will study food webs, biodiversity traits of fish and invertebrates, and physical and biological characteristics of the riparian zone and basin.

The measurements will provide comparisons between U.S. and Mongolian rivers, Dodds said. Mongolian rivers are relatively pristine with few dams and little agriculture around them. By comparison, North American rivers have been affected by non-native fauna, dams and other human activities.

To gather data, Dodds will use two new forms of equipment. One type uses sound waves to measure river depth and water flow speed. The equipment can map the bottoms of rivers and measure how much water is present and how fast it is moving. The second equipment type involves oxygen electrodes that can measure oxygen dissolved in water and how it changes throughout the day.

"There are only a moderate number of these measurements in many rivers around the world," Dodds said. "It is only recently that technological advances have made it possible and now we can gain useful information on the biological activity of rivers."

Kansas State University's Division of Biology is in the College of Arts & Sciences. 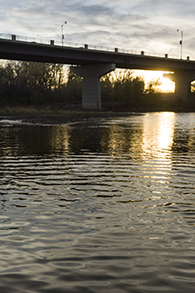 "We really don't know a lot about how rivers function and their biological communities. What is feeding these rivers? Is it leaves falling or is it algae growing and feeding insects and fish? We hope to find out by gathering these measurements."