MANHATTAN — An agronomist and a cosmologist are being honored as the newest Kansas State University distinguished professors.

"I wish to congratulate both of our newest university distinguished professors as Kansas State University recognizes their contributions to teaching, research and service," said April Mason, university provost and senior vice president. "Their leadership in their professions and communities sets an example as we continue our vision to become a Top 50 public research university by 2025."

Both Prasad and Ratra will receive a personalized plaque and medallion at the university's fall 2016 commencement ceremonies.

Prasad is the director of the university's Feed the Future Sustainable Intensification Innovation Lab, which is funded by the United States Agency for International Development, or USAID.

His research focuses on understanding responses of food grain crops to climate change factors and developing crop, water and soil management strategies for efficient use of inputs and to improve crop yields. He has quantified the influence of high temperature stress on various physiological and yield process of several grain crops, improved our understanding of physiological and biochemical mechanisms associated with high temperature tolerance, and screened germplasm collection and identified genotypes tolerant to high temperature stress in various food grain crops. He has active research and capacity building programs in several countries in Asia and Africa that are focused on providing food and nutritional security to smallholder farmers.

Prasad joined Kansas State University in 2005. He has received $62 million in grant funding to support research, education and extension activities from local, national and international agencies. He has published more than 140 peer-reviewed journal articles and book chapters and his research has been cited 4,400 times. He has mentored and trained more than 100 research scholars and graduate students.

He has received several noteworthy awards for his research, teaching and service activities, including International Educator of the Year, the Excellence in Graduate Teaching Award, and the Commerce Bank and W.T. Kemper Distinguished Graduate Faculty Award from Kansas State University, as well as the Early Career and Outstanding Research Award from Gamma Sigma Delta. He is a fellow of the American Society of Agronomy and the Crop Science Society of America.

Ratra works in the areas of cosmology and astroparticle physics. He conducts research on the structure and evolution of the universe. Two of his current principal interests are developing models for the large-scale matter and radiation distributions in the universe and testing these models by comparing predictions to observational data.

In 1988, Ratra and Jim Peebles proposed the first dynamical dark energy model. Dark energy is the leading candidate for the mechanism that is responsible for causing cosmological expansion to accelerate. The discovery that cosmological expansion is accelerating is one of the most significant scientific discoveries of the last quarter of a century.

Since coming to the university in 1996, Ratra has received more than $8 million in individual and collaborative grants, largely from the Department of Energy and the National Science Foundation. Ratra was a National Science Foundation CAREER award winner in 1999 and received the 2012-2013 Commerce Bank Distinguished Graduate Faculty Award at Kansas State University. He is a fellow of the American Physical Society and the American Association for the Advancement of Science.

Ratra's research has appeared in more than 90 scholarly publications, which have been cited more than 11,000 times in scientific literature. 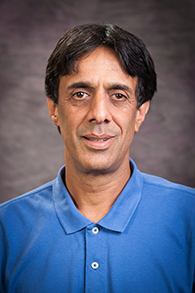 Kansas State University is honoring an agronomist and a cosmologist as the newest university distinguished professors.

"I wish to congratulate both of our newest university distinguished professors as Kansas State University recognizes their contributions to teaching, research and service."