Sharon Wilson, sophomore in music education, Manhattan, is conducting a four-year project with funding from the university's Developing Scholars Program. Her project looks at the unique qualities of Spanish music, how students learning to sing Spanish music may study it differently from other songs, what students like and dislike about the music and more.

"Right now in the music research sphere, world music is a big topic," Wilson said. "One of my professors recently went to a conference where someone asked, 'Why is Spanish music not being studied more?' People are starting to realize it. We just have to interest the decision-makers for it to have a snowball effect."

The project started in August 2014, when Wilson and her advisor, Amy Rosine, associate professor of music in the university's School of Music, Theatre, and Dance, recruited six students to learn a Spanish song. The researchers documented the students' perceptions and experience of the music before they were exposed to it, while they learned the diction and the song's meaning, and after they performed the piece.

"The piano parts in Spanish music are actually guitar parts written on piano, so they are complicated and grand, and they do not help the singer with cues they have become accustomed to in German or Italian songs," Wilson said. "The singer had to learn to be confident in their part.

"Also, the poetry in Spanish is really emotional, so the singers had to research the meaning of their song and perform it with expression to show they knew what they were singing about," Wilson said. "That was difficult for some of the singers, especially the boys, because it's a little harder for most of them to connect emotionally."

Next year, Wilson and her mentors, including Rosine and Ruth Gurgel, assistant professor of music, plan to research how and when Spanish music fell from inclusion to disconnect in regard to vocal performance and music education.

"I think the Hispanic culture right now in the U.S. is at a low," said Wilson, who is part Hispanic. "If you turn on a TV show like 'Modern Family,' 'Rob' or 'Work It,' you'll see them making fun of Hispanics and portraying them as foolish or lazy."

Wilson said that Hispanic culture includes not only Mexicans but also any peoples who speak Spanish or Portuguese, from Central and South America to Spain. Despite Spanish culture's existence in Europe, Wilson said Spanish music is often viewed as separate from highbrow European culture and less refined than French, Italian or German styles.

The study of Spanish music exposes all students to the value of Spanish culture, including those who have never spoken Spanish, as well as students of Spanish descent who may not take proud in their heritage, Wilson said.

"I experienced racial situations growing up that caused me to be ashamed of being half-Hispanic, and I didn't enjoy that part of myself," Wilson said. "Since starting this research, I've gained confidence in who I am, and I'm also helping other Hispanic students to embrace our culture."

This summer, Wilson will present her research at the university's annual music education symposium. She is considering writing an anthology that would include sheet music to more than 20 Spanish songs, along with historical context about each song and guidance for teaching it correctly. Also, she and Rosine are laying the groundwork to establish a study abroad program to a music college in Wilson's mother's hometown, Lima, Peru.

"I would like to see a Spanish diction class created at K-State so students know how to sing the Spanish language," Wilson said. "Most of all, I hope students and educators will become excited about Spanish music."

The School of Music, Theatre, and Dance is part of the university's College of Arts & Sciences. 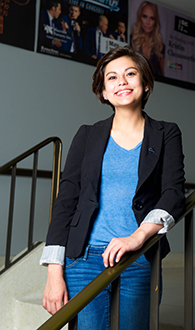 "Right now in the music research sphere, world music is a big topic. One of my professors recently went to a conference where someone asked, 'Why is Spanish music not being studied more?' People are starting to realize it. We just have to interest the decision makers for it to have a snowball effect."
— Sharon Wilson, sophomore in music education