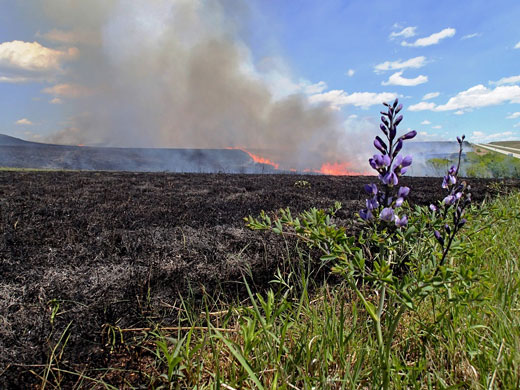 A blue wild indigo flower is rooted at the edge of an annual prescribed burn on Kansas State University's Konza Prairie Biological Station, where ecologists are advising an increase in burning. | Download this photo.

MANHATTAN — Kansas State University researchers have found a three-year absence of fire is the tipping point for the tallgrass prairie ecosystem and advise an increase in burning.

A collaborative study, recently publish in Elsevier's journal, Rangeland Ecology and Management, suggests many land managers in the Flint Hills need to increase burning frequency to more than once every three years to keep the tallgrass prairie ecosystem from transitioning to woodland. The study applied 40 years of data collected at Konza Prairie Biological Station, an 8,600-acre native tallgrass prairie jointly owned by Kansas State University and The Nature Conservancy, to satellite fire maps of the Flint Hills from 2000 to 2010.

The satellite data used in the study — "Assessing the Potential for Transitions from Tallgrass Prairie to Woodland: Are We Operating Beyond Critical Fire Thresholds? " — indicated at least 50 percent of the tallgrass prairie in the Flint Hills is burned every three to four years or less frequently and is susceptible to becoming shrubland. Fire intervals greater than 10 years apart or complete fire suppression have drastic effects — particularly in the absence of grazing.

"In this area, if we completely exclude fire, the landscape can go from tallgrass prairie to a cedar forest in as little as 30-40 years," said John Briggs, director of Konza Prairie and one of the authors of the study. "Once it gets to that point, we are not confident that fire alone is going to bring that back."

According to Briggs, also a professor of biology, the tallgrass prairie is one of the most altered ecosystems in North America with only 4 percent remaining. The grasslands are conducive to cattle ranching and provide economic stability for the area. Native grasses filter freshwater, prevent soil erosion, provide wildlife habitat for grassland birds like the prairie chicken, and mitigate nutrient loading. Briggs also said that if woody vegetation increases near human settlements, so will the chances of dangerous wildfire.

"We knew some areas around the Flint Hills were beyond these fire thresholds but we were still surprised how much of the region is susceptible to shrub and tree expansion," said Zak Ratajczak, the study's lead author and Kansas State University doctoral alumnus.

"Prescribed fire is the most effective tool owners have to manage their land," Briggs said. "Other means, such as mechanically removing woody vegetation or using herbicides, are very expensive and very harmful. Fire is pennies per acre to implement; the other methods can be dollars per acre. That can really add up."

Managed by the university's Division of Biology, Konza Prairie has more than 50 sections of land called watersheds — because they are partitioned based on water flow — that are burned at varying frequencies — from annually to every 20 years — since the land was donated in 1971. The areas of the station with one- and two-year fire intervals have minimal large shrubs compared to a nearby watershed that is burned at three-and-a-half-year intervals and that has lost 40 percent of its area to shrub expansion.

This comparison, combined with the satellite data of the region, is one reason the researchers are advising an increase in burning in many areas, even though they realize this might stimulate discussion locally and for communities downwind.

"This comes at a time where people are really concerned about smoke and our suggestion to increase burning comes with a trade-off," Briggs said. "We are going to have more fire and more smoke, which can affect the air quality in the region and other parts of North America."

To find solutions for this problem, Briggs said land managers are working with fire cooperatives and the Kansas Flint Hills Smoke Management to find best practices and compromise. Briggs said a tour of Konza can give land managers access to research data and might help them establish collaborative practices to reduce the abundance of smoke.

"There is always a conflict to burning," Briggs said. "Most people think that the remaining tallgrass prairie should be a fenced-off preserve. They think that it will take care of itself, but this system is fire derived and historically fire maintained. Aside from the sustainable and ecological aspects, it is critical to people's livelihoods and necessary to ranching communities."

At least 50 percent of the tallgrass prairie in the Flint Hills is burned every three to four years or less frequently and is susceptible to becoming shrubland if fire frequencies are not increased.

"In Flint Hills, if we completely exclude fire, the landscape can go from tallgrass prairie to a cedar forest in as little as 30-40 years."

— John Briggs, director of Konza Prairie and one of the authors of "Assessing the Potential for Transitions from Tallgrass Prairie to Woodland: Are We Operating Beyond Critical Fire Thresholds?".