Pond scum and the gene pool: One critical gene in green algae responsible for multicellular evolution, understanding of cancer origin 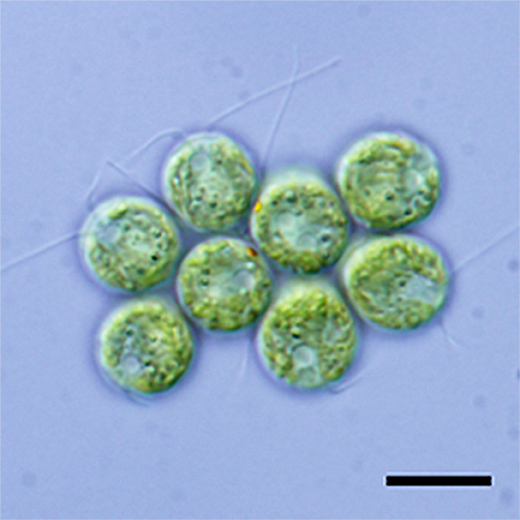 A gene found in this eight-celled green algae is responsible for the evolution of multicellular organisms.

Brad Olson, assistant professor in the Division of Biology; Erik Hanschen, doctoral student at the University of Arizona; Hisayoshi Nozaki, University of Tokyo; and an international team of researchers found a single gene is responsible for the evolution of multicellular organisms. The study is published in a recent issue of Nature Communications.

"Rather than the situation where hundreds of genes have to evolve simultaneously, it's a very subtle change in one gene that causes a reprograming of the cell cycle," Olson said. "Not only did we find a critical gene for multicellularity, it turns out to be a tumor suppressor and it is much easier to evolve multicellularity than anticipated."

Funded by the National Science Foundation and the National Institutes of Health, Olson, Hanschen and their colleagues compared genomes of multicellular alga called Gonium pectorale and its single-celled alga relative, Chlamydomonas reinhardtii. The RB gene is in both algae but has small differences in structure and how it regulates cell cycles.

"RB plays a fundamental role in cell multiplication by regulating cell cycles just before DNA replication starts," Olson said. "Cancer occurs when this gene is defective. In terms of cell cycle and cancer progression, think of RB like the brakes on your car. When the brakes are defective, there is no way to control how the vehicle stops."

"Multicellularity has evolved dozens of times independently," Hanschen said. "It is well-known that plants, animals and fungi evolved independently, but so did red, green and brown algae, volvocine algae, slime molds and bacteria; it's a process that has happened many, many times. The result we find with RB is intriguing because this pathway and this gene are shared among so many of these independent multicellular groups, which are separated by hundreds of millions of years."

When the researchers took the RB gene from Gonium and introduced it in to Chlamydomonas, it caused Chlamydomonas to become multicellular.

"Gonium is representative of the first steps toward the evolution of complex multicellular organisms such as plants and animals," Olson said. "These findings have the potential to help scientists understand the origin of cancer and may contribute to future abilities to treat and detect cancer."

Olson first tested the RB gene in 2012 and then organized the entire research team to investigate numerous other theories for multicellular evolution.

"There have been so many hypothesis about how multicellular evolved," Olson said. "We went through and tested all those hypotheses. We wanted to make sure that our finding was the best."

Brad Olson, Kansas State University assistant professor, and an international team of researchers found a single gene found in algae is responsible for the evolution of multicellular organisms.