Abaxis gives another $250,000 to Kansas State University's Center of Excellence for Vector-Borne Diseases 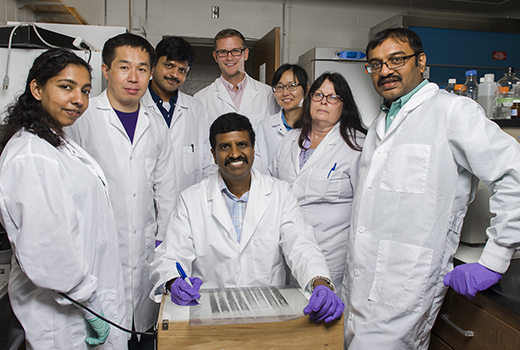 MANHATTAN — For the second time in two years, Abaxis, a leading medical and veterinary technology company, has provided a $250,000 gift to the Center of Excellence for Vector-Borne Diseases in the College of Veterinary Medicine at Kansas State University.

The center is an interdisciplinary research center with a mission to combat vector-borne diseases with a focus on pathogenesis, surveillance and disease prevention.

"The Abaxis foundation support is very valuable in promoting our new center and also for scientific advancement of vector-borne diseases of importance to domestic and agricultural animals, as well as to improve the health of people," said Roman Ganta, professor of diagnostic medicine and pathobiology and director of the center.

In 2015, Abaxis gave a separate $250,000 gift that was used to help establish the center. This year, the funding will support several new projects, including a collaborative research project on Rocky Mountain spotted fever that is focused on evaluating pathogenesis, immunity and vaccine development.

"We hope to discover new knowledge about the disease and development of vaccines, which may aid greatly in improving the health of both companion animals and people," Ganta said. "Scientifically, we expect to publish several research papers and use data from the study to secure federal funding to continue the collaborative research on this important disease."

The Center of Excellence for Vector-Borne Diseases also plans to use part of the Abaxis foundation funding for a heartwater research project.

"Heartwater is an important foreign animal disease of domestic and wild ruminants including cattle, goats and sheep. It is caused by the tick-transmitted rickettsial pathogen Ehrlichia ruminantium," Ganta said. "E. ruminantium introduction into the American mainland can result in mortality rates up to 80-90 percent in domestic and wild ruminants."

"As there are no approved drugs or vaccines against heartwater disease in the U.S., the primary goal of this project is to study its pathogenesis and immunology, and then develop and evaluate a sensitive molecular diagnostic test, and finally evaluate attenuated and subunit vaccines," he said. "We believe that our efforts will not only keep the U.S. cattle industry safe from this important foreign animal disease threat, but also ultimately lead to improved milk and meat production in sub-Saharan Africa and also contribute in protecting global food systems."

Both the Rocky Mountain spotted fever and heartwater projects involve the use of Kansas State University's Biosecurity Research Institute.

"We at Abaxis are pleased to be able to continue providing support for the new Center of Excellence for Vector-Borne Diseases," said Dr. Ken Aron, chief technology officer at Abaxis. "We are particularly pleased as Dr. Ganta has explained that some of the funding will also support graduate student and postdoctoral scientist training."

Ganta said partial financial aid is currently provided to two graduate students — a Master of Science student and a doctoral student — from the center's foundation account.

"We also recruited a minority student for graduate education, who will join the program to pursue a Master of Science in veterinary biomedical sciences starting this summer semester," Ganta said. "Further, a research associate position was offered to Doctor of Veterinary Medicine/doctoral graduate who has several years of experience in vector-borne diseases with partial support from the Abaxis foundation funds. These funds are truly helping in promoting the development of new generation of scientists."

Kansas State University's Center of Excellence for Vector-Borne Diseases is benefiting from a second gift of $250,000 from Abaxis, amedical and veterinary technology company.