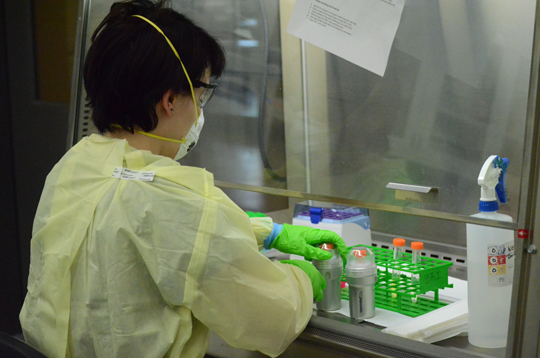 MANHATTAN — An innovative course May 18-22 at Kansas State University's Biosecurity Research Institute, or BRI, is offering an overview of the theory and practice of plant biosecurity for participants from 14 countries. Wheat blast, an emerging disease that threatens worldwide food security, is the focus.

Course organizer Jim Stack, Kansas State University professor of plant pathology, said the wheat blast fungus, Magnaporthe oryzae, has populations that attack rice, ryegrass and wheat, but the wheat species is particularly worrisome. It emerged in Brazil in 1985, then spread to Bolivia and Paraguay, primarily through movement of infected seed. A 2009 epidemic lowered Brazil's yields by 30 percent, and infected local yields can be reduced by 90 percent.

"The concern is if it spreads beyond South America, it could go global. Wheat grows on more acres than any other crop, and wheat is being used to meet food security needs of many people," Stack said.

The course is designed to help participants learn how to contain and exclude a plant pathogen. The timing is crucial. "The world is being overrun right now," Stack said. "Most are unaware, but there could be significant ramifications in how we address poverty and how we achieve food security."

Course registrants include undergraduates to professors as well as graduate students and postdoctoral researchers, all of whom will learn from case studies and hands-on exercises in detection, diagnostics and working in biocontainment labs.

A forensic plant biosecurity desktop exercise with a scenario based on a real event will close out the week. Participants will hear a lecture on applying forensic principles in an agricultural setting, then will be allowed to question "experts," analyze evidence packets, and develop biosecurity plans for a country, a commodity and a specific pathogen. Kansas State University undergraduates and graduate students from the departments of agronomy; plant pathology; and horticulture, forestry and recreation resources will attend.

"We're very excited about having this Plant Biosecurity is Theory and Practice course here at the BRI,” he said. "It's an international cause that's bringing researchers and investigators from almost around the globe, all working together and exchanging ideas, plans and actually going into our training labs to practice some of the techniques they'll be using."

Sessions will be recorded and distributed on DVD.

Stack hopes connecting researchers from around the globe during the course helps meet his objective of containing wheat blast. "It's a good way to get excited about something really scary," he said.