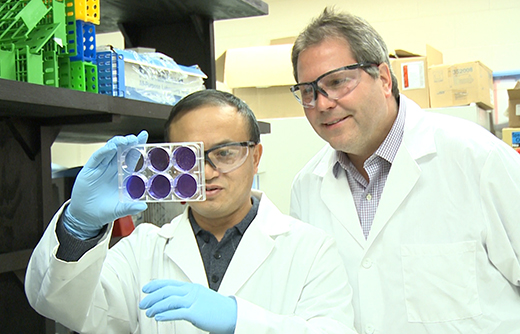 Wenjun Ma, assistant professor of diagnostic medicine and pathobiology at Kansas State University, left, and Jürgen Richt, Regents distinguished professor of veterinary medicine and director of the U.S. Department of Homeland Security's Center of Excellence for Emerging and Zoonotic Animal Diseases, have developed vaccines for H5N1 and H7N9, two emerging strains of avian influenza. The strains are zoonotic and can be transmitted from chickens to pigs and humans. | Download the following photo.

MANHATTAN — A recent study with Kansas State University researchers details vaccine development for two new strains of avian influenza found in other countries that can be transmitted from poultry to humans. Those strains, not found in the U.S., have led to the culling of millions of commercial chickens and turkeys as well as the death of hundreds of people.

The new vaccine development method is expected to help researchers make vaccines for emerging strains of avian influenza more quickly. This could reduce the number and intensity of large-scale outbreaks at poultry farms as well as curb human transmission.

It also may lead to new influenza vaccines for pigs, and novel vaccines for sheep and other livestock, said Jürgen Richt, Regents distinguished professor of veterinary medicine and director of the U.S. Department of Homeland Security's Center of Excellence for Emerging and Zoonotic Animal Diseases.

Richt and his colleagues focused on the avian influenza virus subtype H5N1, a new strain most active in Indonesia, Egypt and other Southeast Asian and North African countries. H5N1 also has been documented in wild birds in the U.S., though in fewer numbers.

"H5N1 is a zoonotic pathogen, which means that it is transmitted from chickens to humans," Richt said. "So far it has infected more than 700 people worldwide and has killed about 60 percent of them. Unfortunately, it has a pretty high mortality rate."

Tests showed that the new recombinant virus vaccinated chickens against both Newcastle disease virus and H5N1.

Researchers also looked at the avian flu subtype H7N9, an emerging zoonotic strain that has been circulating in China since 2013. China has reported about 650 cases in humans and Canada has reported two cases in people returning from China. About 230 people have died from H7N9.

"In Southeast Asia there are a lot of markets that sell live birds that people can buy and prepare at home," Richt said. "In contrast to the H5N1 virus that kills the majority of chickens in three to five days, chickens infected with the H7N9 virus do not show clinical signs of sickness. That means you could buy a bird that looks perfectly healthy but could be infected. If an infected bird is prepared for consumption, there is a high chance you could get sick, and about 1 in 3 infected people die."

"We believe this Newcastle disease virus concept works very well for poultry because you kill two birds with one stone, metaphorically speaking," Richt said. "You use only one vector to vaccinate and protect against a selected virus strain of avian influenza."

Using the Newcastle disease virus for vaccine development may extend beyond poultry to pigs, cattle and sheep, Richt said.

Researchers found they were able to protect pigs against an H3 influenza strain by using the Newcastle disease virus to develop a recombinant virus vaccine. Wenjun Ma, Kansas State University assistant professor of diagnostic medicine and pathobiology, is building on this finding and using the Newcastle disease virus to make a vaccine for porcine epidemic diarrhea virus, a disease that has killed an estimated 6 million pigs.

Richt conducted the avian influenza study with Ma, Adolfo Garcia-Sastre at the Icahn School of Medicine at Mount Sinai in New York, and several other colleagues. They published their findings in the Journal of Virology study, "Newcastle disease virus-vectored H7 and H5 live vaccines protect chickens from challenge with H7N9 or H5N1 avian influenza viruses." It is the first study to look at an H7N9 vaccine in chickens, the animals the disease originates in.