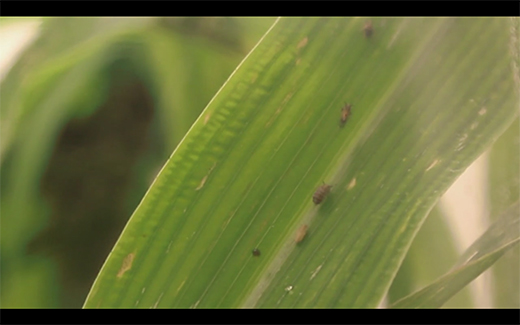 The corn planthopper is featured in an award-winning video by Kansas State University student Anthony Williams about the maize mosaic virus.  | Download this photo.

MANHATTAN — A Kansas State University student is the recipient of a prestigious Best in Festival award from the international Festival of Media Arts, hosted by the Broadcast Education Association. The festival is a refereed exhibition of faculty creative activities and a national showcase for student work.

Anthony Williams, a senior in physics and digital media journalism in the College of Arts & Sciences, Murdock, won the award in the Instructional/Educational category for his video, "Maize Mosaic Virus," which features research by Anna Whitfield, associate professor of plant pathology at the university.

Williams said he learned the significance of inventiveness and effort from a young age.

"Growing up on a farm taught me the value of hard work," Williams said. "The farm didn't have Internet or cable. My brothers and I had to use our imaginations for entertainment."

Already a working journalist, Williams has been a radio personality, intern at KAKE-TV in Wichita, intern at the Wichita Eagle, featured science journalist in a National Science Foundation online video showcase, and now a national award winner.

Williams' path to the Best in Festival award began in Tom Hallaq's video productionclass in fall 2015. Before the start of the school year, Hallaq, assistant professor of journalism and mass communications, collaborated with the National Science Foundation to create a partnership between the NSF and his video production class. Through this collaboration, Hallaq's students would create promotional videos about projects that the NSF is funding at the university. This is the first time the NSF has partnered with a video production class to promote projects it is funding.

The NSF video collaboration involved Hallaq; Sarah Hancock, documentation technical writer in the university's Office of the Vice President for Research; and students in Han Yu's Introduction to Professional Writing course, offered through the English department, who helped with video scripts and produced social media posts and news releases about the projects.

Williams chose to do a video about Whitfield's work with the maize mosaic virus, which affects insects known as corn planthoppers that dwell in cornfields. When infected with the virus, these insects produce larger than normal amounts of saliva, which helps spread the virus. The virus also causes serious harm to the corn.

"I picked Dr. Whitfield's research more out of gut instinct than any sense of logic, although the idea of those old sci-fi movies about huge bugs did intrigue me," Williams said.

As he began the creative process of making his video, Williams took full advantage of the talent available to him in Hallaq's class. Resourcefully consulting his classmates allowed Williams to get the best of the skills available while gaining knowledge for future use, and constantly conferring with Whitfield ensured the factuality of his video.

After the video was complete, the National Science Foundation displayed it on its online video showcase, Science360 News. The video was first featured at the website on Feb. 19.

Williams then entered the video in the Broadcast Education Association's Festival of Media Arts. The association is an international academic media organization that promotes excellence in media production and career advancement for educators, students and professionals.

More than 1,500 entries were submitted to the competition, with only 18 earning a Best in Festival award. Williams said the festival judges called his video "intriguing" and "really original."

"The specific category Tony entered stereotypically consists of videos that are less exciting or thrilling, but more informative in nature," Hallaq said. "For his project to be named Best of Festival means that he beat out entries that traditionally aim to entertain or visually stimulate the audience."

Williams and Hallaq will attend the awards ceremony for the Best in Festival awards April 17-20 in Las Vegas.

"I have to thank the people here at K-State," said Williams. "I had a crazy idea years ago, and no one has ever laughed at me. I've been told 'that's amazing, we need that,' more times than I can count. They have helped me pick myself up when I fail. They've taught me about diversity, and the importance of knowing my own biases. Most importantly, they've taken chances on me when they had no reason to. All of these things have helped me to become the person I am and achieve more than I thought possible. I don't know what the limits are anymore, but I'm going to try to find them and push them."

"There is a crossroads between science and communications, and Tony gets it completely," Hallaq said. "He has the internal passion. He's showing the industry, the world, what he's doing — and he's doing it well."

Kansas State University student Anthony "Tony" Williams is the winner of a Best in Festival award from the Festival of Media Arts.

Anthony Williams, senior in physics and digital media journalism at Kansas State University, has won a Best in Festival award from the international Festival of Media Arts for his science video "Maize Mosaic Virus."

"The specific category Tony entered stereotypically consists of videos that are less exciting or thrilling, but more informative in nature. For his project to be named Best of Festival means that he beat out entries that traditionally aim to entertain or visually stimulate the audience."
— Tom Hallaq, assistant professor of journalism and mass communications