MANHATTAN — Climate change may have a new way of getting under your skin.

Researchers in the College of Veterinary Medicine at Kansas State University have validated a model showing growth in Kansas for the habitat of the troublesome lone star tick. Previously thought only to live in the eastern third of the state, computational modeling and live specimens have revealed the existence of these ticks as far west as Colby, which is only 55 miles from the Colorado state line.

Ram Raghavan, assistant professor in the Kansas State Veterinary Diagnostic Laboratory and diagnostic medicine and pathobiology department, published the findings in the March 2016 issue of Vector-Borne and Zoonotic Diseases. He collaborated on the article "Maximum Entropy-Based Ecological Niche Model and Bio-Climatic Determinants of Lone Star Tick (Amblyomma americanum) Niche" with faculty from Kansas State University's entomology and geography departments as well as other experts in the College of Veterinary Medicine.

"The number of cases of feline tularemia and cytauxzoonosis in the region diagnosed at the Kansas State Veterinary Diagnostic Laboratory have increased steadily over the years, at least partly owing to the wider geographic distribution of Amblyomma americanum, or the lone star tick," Raghavan said. "The model also suggests ongoing warming of global temperatures will likely influence the ecology and distribution of such medically important ticks, favoring more tick-borne diseases among people and pets. Climate conditions in Kansas have already been noted to have changed in noticeable ways, and many such conditions are known to favorably affect tick phenology and spatial distribution."

"For instance, diurnal temperature range, a climate-change index that influenced the model, has been decreasing steadily since the 1950s," he said. "Similarly, increased atmospheric humidity during spring and summer months over the Northern Plains was noted for roughly the same time period. Other ixodid ticks occurring in northern latitudes have already shown shifts in their distribution and abundance that have been linked to warming climate."

"Greg Zolnerowich, professor of entomology, and Doug Goodin, professor of geography, were extremely helpful in providing data for our models, and Townsend Peterson, university distinguished professor of ecology and evolutionary biology at KU, provided much valuable help by sharing his years of experience in using such models to realistically predict species distributions," Raghavan said. "This was also a real team effort with our new Center of Excellence for Vector-Borne Diseases led by Roman Ganta, professor of diagnostic medicine and pathobiology."

Raghavan said the Kansas State Veterinary Diagnostic Laboratory also helped by providing data about the incidence and types of diseases spread by the lone star tick.

Kansas State University's Mike Dryden, university distinguished professor of veterinary parasitology, who is also frequently cited by national media as an expert of fleas and ticks, helped co-author the article.

"At first, Dr. Dryden was skeptical about our findings until he received a tick specimen from a dog that was sent in the mail from a veterinary clinic in Stockton, Kansas," Raghavan said. "This shows that it's not just a model; somebody had actually picked a tick from a dog that had no history of travel. Our team had also collected ticks on trips to areas around Hays, but it's always nice to get evidence from an independent source."

While the spread of pathogens and diseases are worrisome, Raghavan emphasizes that more research is needed. In the meantime, he recommends that people take precautions to help protect themselves and their pets.

"Always wear protection to keep ticks away, and inspect pets frequently to make sure they're not carrying any ticks," Raghavan said. "Nothing will stop the spread of the lone star tick because people are not really doing anything to stop climate change. In the meantime, we need to keep studying not only how the ticks are adapting but also understand how the pathogens associated with these ticks are changing and the potential for elevated risk for humans and animals." 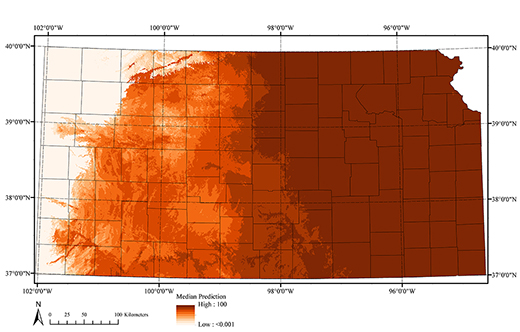 This map shows areas that are suitable for lone star ticks to establish populations. Unlike common belief, this models shows more western regions in Kansas are now suitable due to factors such as climate change.