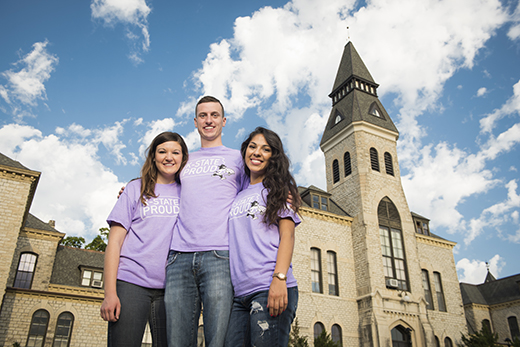 MANHATTAN — K-State Proud, a student-led philanthropic campaign at Kansas State University, has more than a million reasons to celebrate. The campaign, in its 10th year, has raised $1,030,000.

K-State Proud is a nationally recognized fundraising campaign for the university. Guided by the leadership of the K-State Student Foundation, the campaign encourages students to show their K-State pride through philanthropy. All campaign donations support Student Opportunity Awards for fellow Kansas State University students who have exhausted all other forms of financial aid.

"K-State Proud has been able to award more than 520 students with Student Opportunity Awards over the past 10 years," Caban said. "These awards help keep students on campus that wouldn't be able to make it financially without them. It's an incredible thing to know that these awards allow students to stay and graduate from our university and continue to accomplish great things after their time at K-State."

The more than 24,000 students at the university make K-State Proud possible, Schnefke said.

"I attribute that to the helping hand atmosphere that K-State offers as soon as you step on campus," Schnefke said. "People approach us and tell us congratulations for hitting the $1 million mark, but I want them to realize that this is not our campaign, it is their campaign. It is the work of an entire student body striving to accomplish something incredible."

Greg Willems, president and CEO of the Kansas State University Foundation said the KSU Student Foundation and its K-State Proud campaign have created a level of engagement for student philanthropy that is second to none nationally.

"Surpassing their million-dollar goal validates the vision and hard work of this outstanding organization and the students who have offered their service," Willems said. "We're proud to be working with them to build a culture of philanthropy that begins while they are students and will continue for a lifetime of supporting K-State."

Throughout the past 10 years, K-State Proud has been underwritten by GTM Sportswear, K-State Superstore and Cox Communications, covering the campaign's operational costs. Thousands of individuals have contributed to Student Opportunity Awards year after year through their donations to the campaign.

Philanthropic contributions to K-State, including gifts to K-State Proud, are coordinated by the KSU Foundation. The foundation is leading Innovation and Inspiration: The Campaign for Kansas State University to raise $1 billion for student success, faculty development, facility enhancement and programmatic success.

"Surpassing their million-dollar goal validates the vision and hard work of this outstanding organization and the students who have offered their service. We're proud to be working with them to build a culture of philanthropy that begins while they are students and will continue for a lifetime of supporting K-State."
— Greg Willems, president and CEO of the KSU Foundation