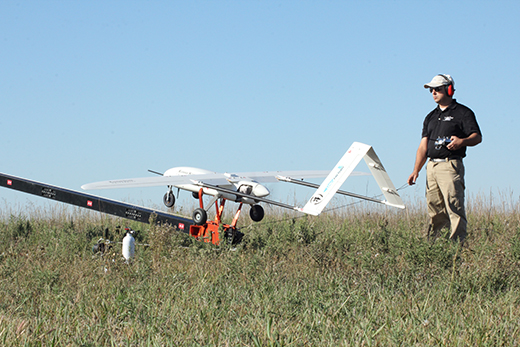 MANHATTAN — Kansas State University is leading an international, multimillion-dollar project that is looking at unmanned aerial systems — or UAS — as a quick and efficient method to detect pest insects and diseases in food crops before outbreaks happen.

The project was recently funded by the Plant Biosecurity Cooperative Research Centre — a consortium of several of Australia and New Zealand's leading governmental research institutions and universities supported by industry and governmental partners. Kansas State University is the center's only U.S. partner. Australia and Kansas share similar agricultural systems and concerns about emerging diseases and insect pests.

"In both Australia and the U.S., there is a lot of interest in the plant biosecurity field on how to increase the efficiency and detection rates of plant-based threats using emerging technologies," McCornack said. "Unmanned aerial systems technologies are promising because they're inexpensive and you can cover a lot of ground in a short amount of time."

McCornack and researchers at Kansas State University's Manhattan and Salina campuses are conducting a series of studies that look at how accurately UAS can detect invasive insects and emerging diseases in commercial wheat fields, as well as how to optimize information collected during flights.

The team's findings may lead to new pest management strategies that use UAS and other imaging technologies for detecting invasive pests in horticulture and grain industries.

The project will initially target the Russian wheat aphid and wheat stripe rust, also commonly referred to as "yellow rust."

Researchers will use UAS to repeatedly monitor FAA-sanctioned fields in key Kansas counties over the wheat-growing season. Aerial images captured by the UAS will be compared and used to identify field sections that have abnormalities, possibly caused by key insect pests or diseases.

According to McCornack, using UAS in this manner removes the current needle-in-the-haystack approach to monitoring crop plants.

"Currently, early detection of an invasive pest requires a great amount of luck and sweat," McCornack said. "Typically, a landowner has to make an educated guess about where to go in a large field to check for infested plants. It works, but if a farmer or scout has several thousand acres to manage, it's not very time effective. Whereas with remote sensing, you can scan a wide area in a short amount of time."

In addition to testing for accuracy, researchers will look at how to refine the aerial images captured by the UAS in order to provide landowners with the most usable data. For example, this could include comparing images taken at varying heights and resolutions — from satellite images to pictures taken on the ground with a mobile device.

"It's important that we're able to detect the next invasive pest," McCornack said. "Since 2001, the invasive soybean aphid has changed how we manage much of the 75 million acres of soybean in the North Central U.S. We believe that using UAS and working closely with farmers and scouts to regularly monitor crops and look for those changes early on can reduce the likelihood of repeating what happened with soybean aphid. Using this technology is not a guarantee, but it can help us understand how to quickly manage new pests that do establish."