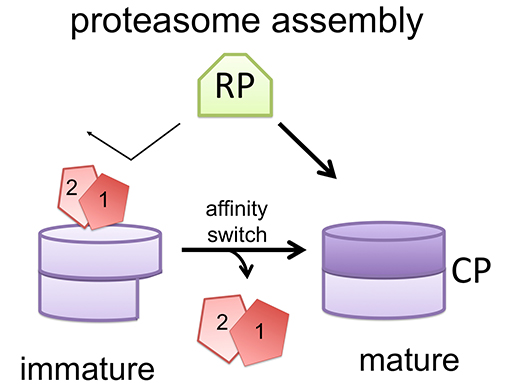 MANHATTAN — A Kansas State University-led study is helping uncover the intricate workings of how a specific "molecular machine" inside of cells is assembled. Fully understanding this process may present new target sites for drugs and may lead to better treatments for neurological diseases, cancers and other disorders.

Jeroen Roelofs, assistant professor in the Division of Biology and a research affiliate with the university's Johnson Cancer Research Center, led a study on a specific step in the assembly of proteasomes.

Proteasomes are complexes inside cells that are responsible for the degradation of damaged and unnecessary proteins, which in turn keep the cells healthy. Proteasomes are formed when 66 components come together in the correct order. The process is orchestrated by a number of proteasome-specific chaperones.

"The process is pretty similar to self-assembly furniture," Roelofs said. "If you buy a dresser at Ikea, you get a bunch of pieces and use tools to put it together before you have a functional dresser. That's the same concept we have in the cell. We start with a bunch of protein subunits and the chaperones function as the tools that assist in the building of subcomplexes, which are like the dresser's drawers and frame. These are then put together to make the final product, which in the cell's case is a proteasome. Once that final product is built, these tools can be reused."

The study identified how two of these tools, the proteasome-specific chaperones Pba1 and Pba2, work at the molecular level to help in proteasome formation.

Experiments and mathematical models showed these chaperones are important to prevent a subcomplex known as the regulatory particle from combining with the core particle before the particle is fully formed.

Researchers found that if the core particle was not fully formed, it tightly bound these chaperone "tools" to itself and used them as a shield to deflect the regulatory particle as it attempted to bind and form a proteasome.

The team discovered that an "affinity switch" was triggered once the core particle became more fully developed. As a result, the core particle had a weaker hold on the chaperone "tools," which were released to allow the regulatory particle to bind and form a proteasome.

"Without this affinity switch regulation, the formation of proteasome complexes is substantially less efficient," said Prashant Wani, doctoral student, India, who conducted most of the work. "Our data and mathematical models from our University of Kansas collaborators suggest that the switch helps to prevent deadlock, which is the accumulation of complexes that are stuck in a partially formed nonfunctional state."

Researchers believe cells developed the affinity switch mechanism for proteasomes to prevent incomplete and faulty pieces from being put together to assemble these "molecular machines."

Roelofs said that understanding how this complex and intricate process of proteasome assembly works may help scientists manipulate it to improve human health.

"As people age, cellular conditions and the cellular landscape change," Roelofs said. "These changes happen more in people with Alzheimer's than those without the disease. Currently, however, we don't have enough knowledge about how these molecular processes work to really know where the problem is in cells."

Roelofs conducted the study with Wani; Alex Ondracek, senior in microbiology, Topeka; and Michael Rowland and Eric Deeds at the University of Kansas.

The project was funded through the Johnson Cancer Research Center, along with the COBRE Center in Protein Structure and Function at the University of Kansas and the Kansas IDeA Network of Biomedical Research Excellence.

The Division of Biology is in the university's College of Arts and Sciences.