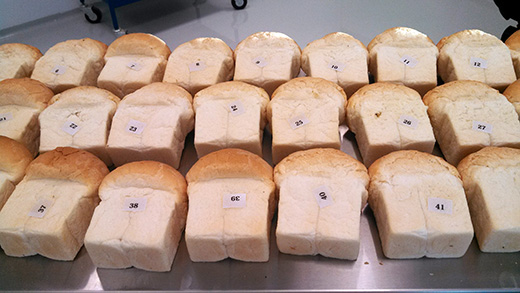 For each breeding line, a quantity of wheat grain is milled and baked into a small experimental loaf, from which total volume is measured as one assessment of the performance of that line. | Download this photo.

MANHATTAN — A team of breeders and geneticists at Kansas State University and the International Maize and Wheat Improvement Center, or CIMMYT, has come up with a new approach to determine if new varieties of bread wheat will have what it takes to make better bread.

With funding from the U.S. Agency for International Development's Feed the Future Initiative, the team is using DNA markers to predict important quality traits for bread wheat, such as dough strength and loaf volume. Their work, "Genomic Selection for Processing and End-Use Quality Traits in the CIMMYT Spring Bread Wheat Breeding Program," was recently published in the journal Plant Genome.

Historically, the main focus of wheat breeding has been grain yield and the selection of lines with the best performance and disease resistance.

"In many breeding programs, quality traits are evaluated at the very end of the selection cycle for candidate wheat varieties because of the high cost and the large quantity of grain needed for testing," Battenfield said. "Because the typical wheat breeding cycle takes eight to 10 years, waiting to test for bread quality until the final years often results in what were thought to be promising wheat lines being discarded because they can't produce a good loaf of bread."

The team used wheat quality data generated in the test baking lab and built prediction algorithms for determining quality traits in new generations of candidate wheat varieties using DNA markers. Using the prediction algorithm, they were able to advance wheat quality screening by at least a year and predict over 10 times more candidate varieties than can be tested in the quality lab.

"Traditionally, we were able to test about 1,500 samples per year in the CIMMYT quality lab, but since we predicted quality by DNA markers alone, we were able to screen all 10,000 first-year yield trials for quality, which is more than would be possible to physically handle, at roughly the same cost," Battenfield said.

Battenfield and the team believe there is potential to advance the process by up to three years.

"Wheat quality testing starts with analyzing grain morphology, hardness and protein content," said Carlos Garcia, head of the Wheat Chemistry and Quality Laboratory at CIMMYT. "The procedure continues milling wheat kernels into flour then determining protein content and how much water is optimal for dough-making in different rheological tests. Then the flour is mixed with water in a mixograph, which is like a miniature mixing bowl with pins that can measure resistance of the dough while it is being developed — like a seismograph."

"We can investigate that curve to tell us how strong a dough from one candidate variety is relative to another and what is the optimum mixing time to get that dough," Battenfield said. "Our Kansas hard red winter wheat needs to have really strong dough because most goes to industrial bakeries, so it needs to be able to withstand industrial processing."

Dough strength, amount of mixing time and extensibility are all measured and bread is baked as a final test of performance. From all this data a decision can be made on whether the wheat line is good enough to keep — but this question cannot come until six to eight years into the breeding cycle.

"Using DNA from single plants, we can use these new prediction models to get an assessment of the quality much earlier in the breeding cycle," said Poland, the study's senior author. "This is long before we have enough seed for quality testing."

Decreasing breeding cycle time has the biggest impact in breeding on return on investment, according to the researchers.

"These adjustments indicate that we could increase selection for quality two to three times above what is currently possible," Poland said.

The results also show that wheat breeding programs can use genomic selection for wheat quality, along with their traditional breeding pipeline, to more effectively and efficiently use resources, including time and money.

Poland said this prediction method allows the elimination of lines that would not be able to pass the final test of wheat quality. Accurate processing and end-use quality prediction models, such as genomic selection, will allow breeding programs to cull unacceptable lines or target specific lines before time and resources are invested in lines that will not pass the final test.

Additional sources of funding for the study were provided by the Monsanto Beachell-Borlaug International Scholars Program, the Bill and Melinda Gates Foundation, CGIAR CRP WHEAT and the Durable Rust Resistance Project.

"Using DNA from single plants, we can use these new prediction models to get an assessment of the quality much earlier in the breeding cycle. This is long before we have enough seed for quality testing."