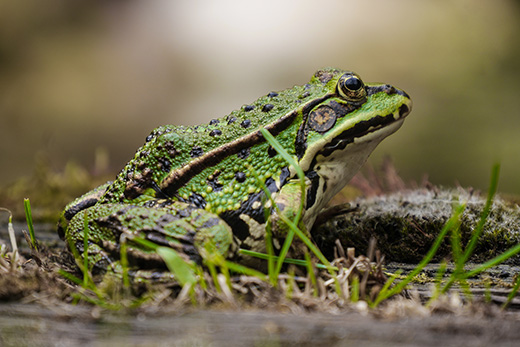 A Kansas State University researcher is leading a study probing whether wild amphibians could be zoonotic disease hosts. | Download this photo.

MANHATTAN — Three different laboratories at Kansas State University hopped on board for a study that looks at the potential role of amphibians as a host for the spread of infectious diseases.

Yongming Sang, research associate professor of anatomy and physiology in the College of Veterinary Medicine, is leading the project, which has produced the recently published article in Nature's Scientific Reports, "Expansion of amphibian intronless interferons revises the paradigm for interferon evolution and functional diversity."

"This study highlights the unique position of the amphibian interferon system in interferon evolution and its potential role in prevention of cross-species viral transmission to humans," Sang said. "Amphibians have a previously unknown complexity within their antimicrobial interferon system, which is highly and differentially responsive to influenza infections. This suggests the need to study the possible role of wild amphibians as overlooked reservoirs/end hosts for influenza and other zoonotic pathogenic infections."

Reptiles and amphibians are considered as potential vectors, or hosts, harboring Influenza A viruses, or IAV, and other zoonotic pathogens, but their role in zoonoses has received little attention, Sang said.

Compared with the IAV strains isolated from chickens and horses, Sang said the pig isolates showed higher infectivity in frog cells, which indicates a closer relationship between amphibians and pigs in IAV exchange before the virus jumps to humans.

"We learned that amphibians as typical insect eaters could also be critical vectors for other arthropod-borne viruses and intracellular bacteria, which are a major health threats in both humans and animals," he said. "The coordinated regulation of protective responses mediated by interferon signaling in both vector animals and end hosts may provide an integrated approach to discern critical components of conserved, cross-species innate immune mechanisms."

The work was mainly supported by Kansas State University's Faculty Development Fund and Start-up Fund, and in part by the U.S. Department of Agriculture and the National Institute of Food and Agriculture's Agriculture and Food Research Initiative. Support also was provided from the Kansas Agricultural Experiment Station.

A study by a collaborative research team led by Kansas State University's Yongming Sang that probes if wild amphibians could be hosts for infectious diseases was recently published in Nature's Scientific Reports.