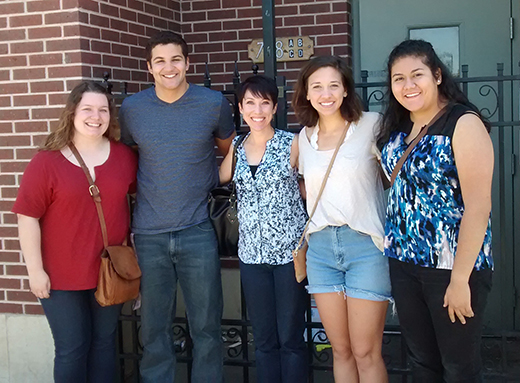 MANHATTAN — Immigrant workers from Central America are influencing rural Kansas' society and economy, according to a Kansas State University sociology professor who is conducting a study of the workers with her student research team.

Garni is especially interested in how dairy farmers in remote, depopulated areas of the U.S. are recruiting immigrants to settle and work permanently in their towns. Based on her study, she said most of the farmers in Dairy City — a name used to protect study participants' confidentiality — have tried recruiting locally and do employ some longtime Kansas residents, but because the work is labor-intensive and their farms are growing quickly, they find it helpful to hire immigrants.

"They need workers with very specific skills, and they are encouraging them to settle with their families in the area. How do you do that in remote areas that have previously experienced significant population decline, as well as the loss of local services and businesses?" Garni asked. "It's interesting, puzzling and challenging, but they are doing it."

In addition to previously well-understood methods of recruitment that include word-of-mouth to friends and relatives in Central America and the United States, and state-based programs providing workers with short-term visas, Garni has discovered various ways in which farmers are improving their operations to attract excellent employees who will continue to work on their dairies for as long as possible.

"The relationships employers form with the workers and their families are so important in helping the farmers' dairies and towns to grow," Garni said.

Societal change because of immigrant labor is occurring in the midst of aging populations and depopulation, which are common phenomena in remote, rural communities. Garni said one of her most surprising findings is the extensive quality of the intergenerational, intercultural relationships that form between immigrant workers and aging populations.

"The residents who are retiring welcome newcomers who aren't as familiar with the area, and some of the newcomers assist some of the retirement-age population if they need help with something, or just to learn and share life stories," Garni said. "It's been pretty powerful to see that connection."

"Immigrant labor strengthens local housing markets and businesses that relate to farming — everything from consumer retail, food and clothing, and home supplies to farm implement manufacturing — because it supports the dairies and agriculture, which then support other industries," Garni said. "It has a chain reaction."

Though Garni refers to the immigrant population as significant, she said Hispanics still comprise a small minority of the predominantly white communities in rural Kansas. Most of the influx of Central Americans to rural areas of the U.S. can be traced to the farm crises and rising interest rates of the 1980s, when many small farming communities experienced out-migration to cities.

"In rural Kansas communities in the last 10-15 years, we've seen a movement in which dairy farmers are changing their hiring practices to rely more heavily on immigrant labor," said Jill Applegate, a May 2016 bachelor's graduate in political science and modern languages, Shawnee, whose work with Garni was funded through the university's Undergraduate Research Award. "We started to see this phenomenon occurring about 10 years ago, but the actual process that led up to this movement has been happening for decades."

The sociology, anthropology and social work department is in the College of Arts & Sciences.

"The residents who are retiring welcome newcomers who aren't as familiar with the area, and some of the newcomers assist some of the retirement-age population if they need help with something, or just to learn and share life stories. It's been pretty powerful to see that connection."