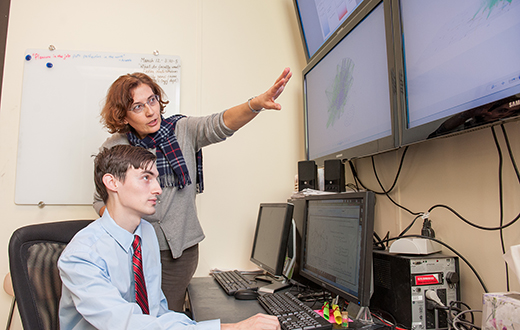 Caterina Scoglio, top, a Kansas State University electrical and computer engineering professor, and her former student, Phillip Schumm, co-authored a study to estimate movement of cattle to determine the risk of disease. | Download the following photo.

MANHATTAN — A new technique developed by a Kansas State University researcher helps estimate the movement of beef cattle to determine the risk of disease.

"Movement in other countries is well documented, but not in the U.S.," Scoglio said. "A national animal ID system is not in place, so there is no detailed data on where cattle come and where they go."

Highly accurate risk assessment or predictions of disease spread depend on knowing how cattle move through the central U.S.

"We have disaster response plans, but to know where to act effectively to stop an epidemic requires movement data," Scoglio said.

"This study provides a cost-effective approach to estimate cattle movements from available aggregate data," said Phillip Schumm, research geneticist at the Department of Agriculture-Agricultural Research Service and co-author of the study. Schumm earned a bachelor's degree and a doctorate in electrical engineering from Kansas State University, with Scoglio serving as his major professor.

Other studies have predicted movement between counties, but this study predicts movement within types of premises in counties, such as from one small cow/calf producer to feedlots in two different counties at a given distance or from one producer to another. Scoglio and collaborators divided premises into nine types then imposed constraints to capture industry and farm procedures; for instance, cattle headed to a slaughter facility move in only one direction. The authors estimated the movement parameters by having minimal assumptions beyond the information contained within the set of constraints.

"We create a network of cattle movement in this way," Scoglio said. "Based on this, we used an epidemic model to assess possible scenarios of a foot-and-mouth disease outbreak."

The study revealed significant risk of a disease infiltrating the American cattle system, but further investigation of accurate epidemic models and animal movement parameters is needed.

Other researchers are also striving to understand threats to global food systems. Scoglio is working on another project with Kansas State University collaborators in diagnostic medicine and pathobiology, agricultural economics and psychological sciences to add truck movements to the model and to gather more data. Scoglio's group shares downloadable data files and methods online in an effort to invite others to build on its work.

"The better the data, the more we know and can better protect the beef cattle industry," Scoglio said.

"An estimation of cattle movement parameters in the Central States of the U.S." was published in the August 2015 issue of Computers and Electronics in Agriculture and was based on work supported by the U.S. Department of Homeland Security and the Kansas Biosciences Authority.