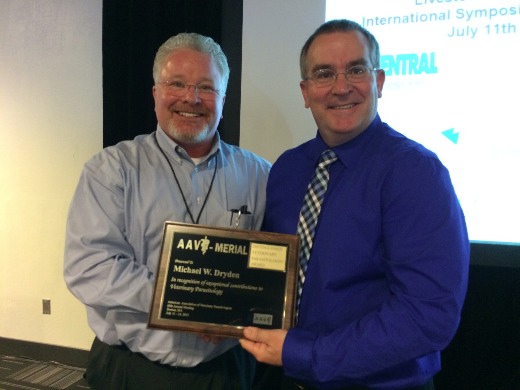 MANHATTAN — A Kansas State University veterinarian who is recognized as one of the world's foremost authorities on fleas and ticks — earning the nickname "Dr. Flea" — has been honored for his lifetime achievements in the advancement of veterinary parasitology.

Presentation of the award was July 11 in Boston at the association's 60th annual meeting.

"Receiving the 2015 AAVP distinguished parasitologist of the year award was a most humbling experience," Dryden said. "It is the highest honor bestowed by the association, and I never considered that the association would honor me with this career achievement award."

"Mike is a quintessential faculty member," said M.M. Chengappa, university distinguished professor and head of the diagnostic medicine and pathobiology department. "We're fortunate to have a professor of his caliber and stature in the college at Kansas State University. He's an asset not only to the college, but also to the profession in general."

"Mike is the consummate teacher," said Doug Carithers, secretary-treasurer of the AAVP. "He is able to clearly explain complex relationships and concepts in a logical, passionate and entertaining manner that is relevant for the particular audience, no matter what their background. Most importantly, even though he's considered the flea expert worldwide, he remains open-minded enough to keep learning and explore the possibilities, making him not only a great teacher, but an excellent student of science."

Born in Osborne, Dryden grew up on a farm northwest of Cawker City. He earned a bachelor's degree in 1982 and a Doctor of Veterinary Medicine in 1984, both at Kansas State University. He later earned a master's degree in 1988 and a doctorate in 1990, both from Purdue University, West Lafayette, Indiana. It was while he was a graduate student at Purdue that the veterinary students started calling him "Dr. Flea." Upon completion of the graduate program, Dryden accepted an offer from the College of Veterinary Medicine at Kansas State University as an assistant professor of veterinary parasitology.

At Kansas State University, Dryden developed a research program along with Patricia Payne and his laboratory staff that has been involved in two primary areas: the biology and control of fleas and ticks infesting dogs and cats and the diagnosis and control of gastrointestinal parasites of dogs and cats.

Dryden was promoted to full professor in 1999 and in 2011 received the designation of university distinguished professor, Kansas State University's highest faculty ranking. In 2011, he was recognized as a charter diplomate of the American College of Veterinary Microbiology when the D.V.M.-Parasitology specialty also was initiated.

Recognized as a passionate educator, Dryden co-taught the College of Veterinary Medicine's Veterinary Parasitology course from 1990 to 2001, becoming course coordinator in 2002 and co-teaching it with Payne for the last 12 years. In 2010, along with Payne, he developed the "Evidenced Based Small Animal Clinical Parasitology Training Course," often called Wildcat Parasitology. More than 140 graduate veterinarians from practice, academia and industry in the U.S., Canada, Australia and Europe have attended this intense weeklong course, designed to provide a deep dive into practical small animal veterinary parasitology.

Dryden has been invited to lecture in more than 21 countries, presenting more than 1,000 invited seminars at scientific conferences and at dozens of veterinary continuing education meetings. He also has been recognized with numerous awards and honors for his teaching, research and service to the veterinary profession.