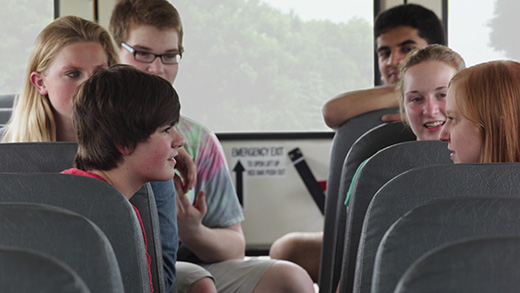 Teenagers may not be causing language change the way we typically think, according to Kansas State University linguistics research. | Download this photo.

1. Mary Kohn, Kansas State University assistant professor of English, describes how it is socially important for teenagers to play with language.

2. Kohn describes how vowel sounds can provide social and regional information about a person.

3. Do you ever think that an actor is faking an accent in a movie? Kohn discusses how to identify fraudulent accents based on pronunciation rules.

MANHATTAN — If you're too "basic" to "YOLO" or think that slang is never "on fleek," fear not: How teenagers speak IRL is not ruining the English language, according to Kansas State University linguistics research.

In fact, teenagers may not be causing language change the way that we typically think, said Mary Kohn, assistant professor of English. Kohn studies language variation and how language changes over time.

Kohn's latest research found that teenagers are not solely causing language change. Rather, language changes occur throughout a lifetime and not just during the teenage years.

"Our research has shown teens are being dynamic with language, but not necessarily in a consistent way," Kohn said. "We aren't eliminating the possibility that teenagers are driving sound change, but we might be grossly overstating the role of teenagers."

Kohn found there was not a consistent language path that a person took from childhood through adolescence and into adulthood. Language change is more individualistic and varies for each person, she said.

"Very commonly, people think that teenagers are ruining language because they are texting or using shorthand or slang," Kohn said. "But our language is constantly developing and changing and becoming what it needs to be for the generation who is speaking it. As a linguist, I find this really exciting because it shows me that our language is alive."

Kohn used the Frank Porter Graham project, which is a database that followed 67 children from infancy to their early 20s. The database includes audio and interview recordings from nearly every year of the children's lives and also has recordings of family members, friends and teachers — all valuable information for understanding how language changes as individuals grow up, Kohn said.

Using this database, Kohn studied sound waves — a precise measurement of how people pronounce words. She focused on 20 individuals during four different time periods: fourth grade, eighth grade, 10th grade and post-high school at age 20. Kohn measured pronunciations to see if the participants dramatically changed during the teenage years. Her longitudinal approach offered a before and after look at linguistic pronunciation during the teenage years.

"The teenager subgroup did not stand out as a group from the rest of the subgroups, meaning there was nothing special about being a teenager," Kohn said. "Just because you are a teenager doesn't mean you will change your language. Perhaps our stereotypes about how teenagers speak are often based on subgroups of teenagers that stand out to us as most distinct. We notice the kids who make bold fashion statements, so we also might notice the kids who are making dramatic linguistic changes."

Other subgroups experience language change, Kohn said, and she suggests that sources of language change may happen in younger children. Children turn away from adult influence when they get to school, which may be the crucial point when language starts to shift.

During high school, teenagers often explore their own identities and may again choose to change their pronunciations and use language as a part of their identities. When these teens grow up and graduate from college or get a job, they may change their language again to sound more professional and meet the demands of their jobs and pressures of the workplace, Kohn said.

Kohn recently published the research in a monograph, "The way I communicate changes but how I speak don't." The research was a collaboration with researchers at North Carolina State University, including Walt Wolfrom, Janneke Van Hofwegen, Charlie Farington and Jennifer Renn.

The English department is in the College of Arts & Sciences.

In her latest linguistics research, Mary Kohn, Kansas State University assistant professor of English, says that we may be overstating the role of teenagers in language change.

Teenagers are not solely causing language change, according to Kansas State University research. Language changes occur throughout a lifetime and not just during the teenage years.

"We aren't eliminating the possibility that teenagers are driving sound change, but we might be grossly overstating the role of teenagers."