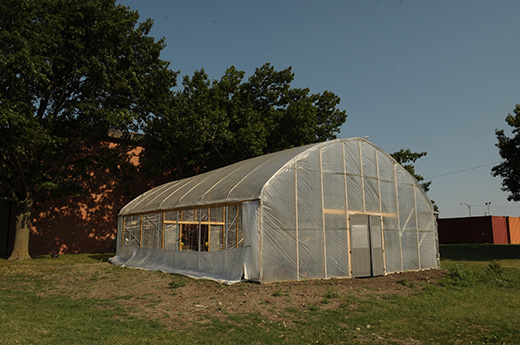 OLATHE — Kansas State University researchers are nearly halfway through a four-year project to learn more about improving the freshness and shelf life of locally-grown produce.

So far, they've verified a common belief that there is a boost in production when growing produce in high tunnels, a low-cost alternative to a traditional greenhouse.

But a newer finding is that shelf life is affected when produce is grown in high tunnels compared to an open field. A longer shelf life makes the products more marketable and can dramatically add to the grower's profits.

Kansas State University's work is part of a $1 million grant shared with the University of Florida. Researchers have been comparing two model crops — tomatoes and spinach — grown in high tunnels and in open fields.

High tunnels are prevalent among small-acreage growers in the Midwest and are becoming more popular across the country. In Florida, high tunnels help protect vegetables from heavy rains, while Kansas growers use them to protect from high winds and damaging storms.

"People have known for a while that you can improve production by growing in high tunnels," said Cary Rivard, director of Kansas State University's Horticultural Research and Extension Center in Olathe. "Our findings that produce grown in high tunnels has a longer storage life and shelf life are something that have never been reported in the scientific literature.

"If we're getting a few more days of storage for tomatoes grown in high tunnels compared to open fields, that's going to make an impact on the availability of those products," he said.

Eleni Pliakoni, a Kansas State University assistant professor of horticulture who specializes in urban food production and postharvest handling, said that as much as 40 percent of fresh produce is lost in the food chain due to spills, spoilage and other losses.

"Proper cold storage facilities for vegetables are very expensive and many of the new and first-generation farmers in our area don't have the equipment they need to store produce at the optimum temperatures," Pliakoni said. "Through our research, we are trying to develop tools that they can use to extend storage life even with limited storage facilities."

The researchers also have found a new challenge.

"It appears that the light spectrum available to the crop plants inside a high tunnel can affect the production of certain phytochemicals, such as antioxidants," said Rivard, who along with Pliakoni will begin a new project in 2016 to investigate the role of light in phytochemical production and evaluate new plastic films and light-emitting diode, or LED, technology.

"Our goal is to increase the nutritional quality of crops grown in the high tunnel," Rivard said.

"As extension educators, our job is to take the work done in the lab and help our farmers implement these systems," Rivard said. "We hope we can help local growers scale up to meet the needs of institutional markets like schools, hospitals, and other wholesale buyers."

In addition to field trials with tomatoes and spinach, researchers at the University of Florida are testing the use of hot water treatments and chemical washes that can be used by certified organic growers to reduce postharvest losses.

Pliakoni is leading work to test modified atmosphere packaging, similar to what is used for packaged mixed greens in the grocery store. She said that combined with physical or chemical washes, this could extend the shelf life of produce.

The researchers also are working with a software development consultant to create a smartphone application for growers. The app will help growers track losses and understand why those losses occurred.

The research by Kansas State University and the University of Florida is funded until March 2018 by the National Institute for Food and Agriculture through the Agriculture and Food Research Initiative.

"If we're getting a few more days of storage for tomatoes grown in high tunnels compared to open fields, that's going to make an impact on the availability of those products."