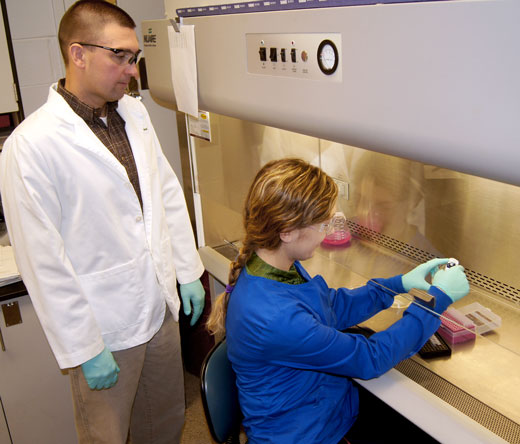 Benjamin Hause works with Rachel Palinski, a doctoral student in diagnostic medicine and pathobiology in the College of Veterinary Medicine at Kansas State University, on a set of samples being examined for porcine parainfluenza virus 1. | Download this photo.

MANHATTAN — The usual suspects are not to blame for recent cases of respiratory disease in domestic pigs. Researchers in the Kansas State Veterinary Diagnostic Laboratory have successfully published the first formal identification and characterization of porcine parainfluenza virus 1 from U.S. pigs, which had previously only been detected in Asia.

Benjamin Hause, an assistant professor in the College of Veterinary Medicine, and Rachel Palinski, doctoral student in diagnostic medicine and pathobiology, worked with a team of scientists that published its findings in the Nov. 17, 2015, issue of the Journal of General Virology in the article "Widespread detection and characterization of porcine parainfluenza virus 1 in pigs in the United States."

"The Kansas State Veterinary Diagnostic Laboratory received diagnostic samples from pigs that showed signs of acute respiratory disease, sent to us from multiple states," Hause said. "The common agents are usually influenza or porcine reproductive and respiratory syndrome virus; however, these samples were negative for both of these viruses. To identify other possible viruses present in the samples, we utilized advanced DNA sequencing methods, and the common finding was porcine parainfluenza virus 1. It's the first formal identification of this relatively newly described virus in the U.S. We were also surprised to find there is considerable genetic variability for porcine parainfluenza virus 1 between the different samples. They're not all identical viruses. There are mutants and probably different subtypes in the U.S., so there is genetic variation no one knew about before."

"We screened 300 random samples, including nasal swabs, lung tissue or oral fluids, and found that 6 percent tested positive for the parainfluenza virus," Hause said. "We were also able show that the virus replicates in the upper respiratory tract. We then developed a serology assay to look for antibodies to see how common it is for pigs to have been exposed to this, and about 50-60 percent of the samples were positive. This suggests the virus did not just arrive here or that it is in just one area of the country."

Hause said demand is building for the development of a vaccine.

"Talking to swine veterinarians, this virus is something that likely causes respiratory disease in pigs," Hause said. "It does not typically cause severe disease, but it's the kind of disease that causes an infected pig to fall behind. A pig will get a mild cold, won't eat as well, wean as fast or take off like its litter mates, so there is likely economic significance with the disease."