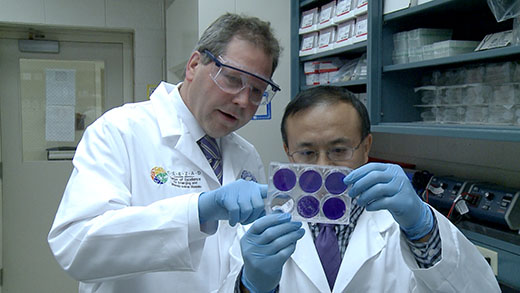 MANHATTAN — A team of researchers at Kansas State University, in collaboration with Garcia-Sastre of the Icahn School of Medicine at Mount Sinai, has developed a vaccine that protects poultry from multiple strains of avian influenza found in the U.S., including H5N1, H5N2 and H5N8. The vaccine has the potential to be administered through water or into embryonated eggs, making it easier for poultry producers to vaccinate flocks.

The vaccine, called NDV-H5Nx, protects chickens and likely other poultry against the three recently introduced U.S. avian influenza strains H5N1, H5N2 and H5N8, as well as against Newcastle disease virus — a virus that naturally affects poultry. Avian influenza killed millions of chickens and turkeys in the U.S. in spring and summer 2015, leading to billions in lost revenue for the U.S. poultry industry.

The NDV-H5Nx vaccine also has the potential to be administered to millions of birds at a time through water, said Jürgen Richt, Regents distinguished professor of veterinary medicine, director of the U.S. Department of Homeland Security's Center of Excellence for Emerging and Zoonotic Animal Diseases at Kansas State University and one of the researchers involved in the discovery.

"The vaccine we produced is a live vaccine, which means it replicates in birds," Richt said. "Because it's live, we believe that the vaccine could be sprayed into the air or put in the water supply so that when the chickens need a drink, they could be vaccinated. A poultry farm could vaccinate all of its birds in a single day because all living creatures need water to live."

The vaccine also has potential to be administered to developing chicks in eggs, resulting in offspring being automatically vaccinated for the diseases, said Wenjun Ma, Kansas State University assistant professor of diagnostic medicine and pathobiology and one of the researchers involved.

H5 vaccines currently on the market require that each chicken be injected by hand. Many poultry operations have millions of birds and it would take many hours to vaccinate every chicken, Richt said.

Additionally, the NDV-H5Nx vaccine has the ability to differentiate infected from vaccinated animals, or DIVA. This compatibility is critical for the U.S. poultry industry because it provides evidence to trade partners that poultry have been vaccinated and is free of H5, Richt said.

Researchers developed the NDV-H5Nx vaccine with a recombinant virus technique similar to the one used to make NDV-H5N1 and NDV-H7N9 vaccines in 2015. The extracellular domain of the H5 or H7 protein of the respective avian influenza viruses was transplanted into the Newcastle disease virus vaccine strain LaSota in order to make the vaccine constructs.

The three H5Nx strains are genetically similar but cause different disease severity in birds. The H5N2 strain is most prominent in the U.S. and the deadliest. The original H5N8 avian influenza strain was first found in South Korea in 2014 and subsequently in other Asian countries, including China and Japan, before spreading to Europe. It came to North America as H5N8 where it mixed with other avian influenza viruses in the U.S. and Canada to form H5N2 and H5N1, Ma said.

Richt and Ma presented the project along with the proof-of-concept vaccination methods at a recent meeting of stakeholders and leaders in the U.S. agricultural industry, including the chicken and turkey industries, who will be helpful in the further development and adoption of the NDV-H5Nx vaccine. Researchers are currently preparing to publish their findings in a scientific journal.

The project was funded through the National Bio and Agro-defense Facility's research project transitional funds and Avimex. NBAF, under construction adjacent to Kansas State University's Manhattan campus, will be the U.S. Department of Homeland Security's foremost animal disease research facility and will study high-consequence animal diseases that affect the nation's agriculture and biosecurity.

In the course of three months, Kansas State University researchers were able to develop and test a new vaccine that protects chickens and other poultry from multiple strains of avian influenza found in the U.S., including H5N1, H5N2 and H5N8.

— Juergen Richt, Regents distinguished professor of veterinary medicine and director of the U.S. Department of Homeland Security's Center of Excellence for Emerging and Zoonotic Animal Diseases at Kansas State University