MANHATTAN — With the Zika virus outbreak growing, a Kansas State University infectious disease expert says that research is crucial to combating this outbreak and preventing the spread of other mosquito-borne viruses.

Kansas State University's Biosecurity Research Institute is researching Japanese encephalitis, which is a mosquito-borne virus similar to Zika virus. While the institute is not currently performing Zika virus research, it does have isolates of the African lineage of Zika virus, which is similar to the Asian lineage involved in the current outbreak.

Zika virus is transmitted by mosquitoes to people and can cause fever, rash, joint pain, muscle aches and conjunctivitis, among other symptoms. While it is typically found in Africa and Asia, it appeared in Brazil in May 2015 and has spread to other countries. Several U.S. cases have been confirmed, and the Centers for Disease Control and Prevention recently issued travel guidelines for pregnant women.

"What is unusual with this current epidemic in the Americas is that we are seeing cases where pregnant women who get infected are passing on the virus," Higgs said. "In Brazil, there have been almost 4,000 cases of babies born with birth defects. This aspect of infection has never been seen with Zika virus and, unfortunately, we don't know why this is suddenly occurring in the Americas."

The Biosecurity Research Institute, in Pat Roberts Hall, is equipped to help with any research that may find a solution for the virus, said Higgs, who researches mosquito-virus-vertebrate interactions.

"Our capability to work with animals, plants, food and diseases that can infect people gives us the extraordinary capacity to do interdisciplinary research across Kansas State University," Higgs said.

University scientists have studied two similar mosquito-borne viruses: chikungunya, which affects humans and includes fever and joint pains, and Japanese encephalitis, which is found in pigs and birds and can transmit to humans through mosquitoes. Japanese encephalitis has been identified as an important disease for research at the National Bio and Agro-defense Facility, or NBAF, the U.S. Department of Homeland Security's foremost animal disease research facility that is being built adjacent to the university's Manhattan campus.

"We're doing the first U.S. studies of this type in 50 years and we're looking at whether Japanese encephalitis could be transmitted by mosquitoes currently in North America," Higgs said.

The studies are supported by the state of Kansas NBAF transition fund and are a collaboration with the U.S. Department of Agriculture’s Arthropod-Borne Animal Diseases Research Unit, based in Manhattan.

In the meantime, the best protection against Japanese encephalitis, Zika virus and other similar diseases is to avoid being bitten by mosquitoes, Higgs said. He recommends wearing long pants and long-sleeved shirts and using insect repellent. People also can avoid travel to areas where the outbreak has been reported.

"Anybody traveling to those areas needs to be aware that there is a new virus in addition to the viruses already in the area, such as dengue fever or chikungunya," Higgs said. "The same advice is for appropriate for everyone who goes to that area: Avoid being bitten by mosquitoes."

Higgs is the president of the American Society of Tropical Medicine and Hygiene and is an expert in vector biology, arthropod-borne infectious diseases, immune modulation and vaccine evaluation. 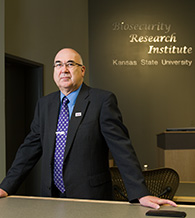 Stephen Higgs, an infectious disease expert and director of the Biosecurity Research Institute, says that research is crucial to combatting the Zika virus outbreak and preventing the spread of other mosquito-borne viruses.

A Kansas State University infectious disease expert says that research is crucial to combatting the Zika virus outbreak and preventing the spread of other mosquito-borne viruses, such as Japanese encephalitis and chikungunya.

"One of the strengths that we have here at the Biosecurity Research Institute is the development of diagnostics and vaccine work. That is exactly what is needed to enable timely responses to new diseases as they come along."