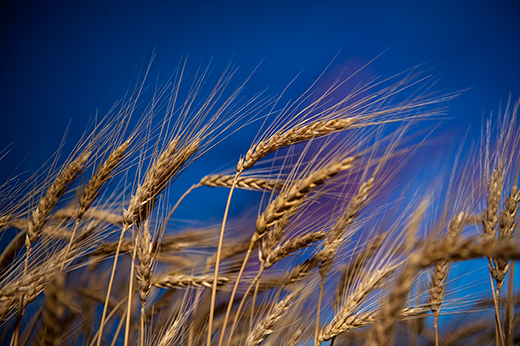 MANHATTAN — In the past seven years, the U.S. Department of Agriculture has awarded Kansas State University $6.5 million to keep a wheat fungus that has had a devastating impact on wheat production in South America out of the United States.

But the university's Barbara Valent, who has led a project that includes field and laboratory trials in four countries, concedes that good science has combined with a little bit of luck to keep wheat blast, which is caused by the fungus Magnaporthe oryzae, from infecting U.S. fields.

Valent, a university distinguished professor of plant pathology, said that the fungus thrives in warm, wet environments like that found in Bolivia and Brazil, where growers have struggled with the disease for more than two decades.

Those conditions came together in Kentucky in 2011, however, when a single wheat head was infected with wheat blast. It's the only known incident of the fungus being found in a U.S. wheat crop, and a very clear warning that the country's farm fields aren't safe from the threat.

"What we do know is that the Kentucky fungus was not imported from South America; it's a native strain," Valent said. "We have this turfgrass disease called gray leaf spot that's caused by the same fungus, although it's a different host-adapted form of the fungus.

"This turfgrass pathogen is very closely related to the wheat blast strains in South America. A good percentage of the turfgrass strains are capable of infecting wheat but the climate in the U.S. is just not quite right during the wheat growing season."

Valent and her colleagues are studying the disease at the Biosecurity Research Institute, a biosafety-level 3 and biosafety level 3-ag facility in Pat Roberts Hall at Kansas State University.

"We are working on basic understanding of how this fungus affects plants, and searching for new sources of resistance," Valent said. "We've succeeded in finding a resistance gene called 2NS. Breeders have been using a piece of a chromosome from wild wheat that has provided rust resistance and nematode resistance. Our good luck was to find that it also provides some resistance to wheat blast."

But the fungus is a constantly moving target, she said.

The group of researchers includes more than a half dozen from Kansas State University plus scientists from six other universities, the U.S. government and agricultural agencies in Brazil, Bolivia and Paraguay. They have also tested fungicide and seed treatments, and developed diagnostic tools to clearly identify wheat blast.

"We've expanded our capacity and developed good collaboration for field tests in South America," Valent said. "Farmers in South America want to know about resistance, they need resistance. They are going to use the things we are finding. Ultimately, the best way to keep this disease from spreading is to control it in South America."

The extension publication "Identifying Wheat Diseases Affecting Heads and Grain" provides agricultural specialists and farmers needed information to identify wheat blast if it occurs in U.S. fields. So far, 32,500 copies of this publication have been distributed in 29 states and Canada.

Valent's website, k-state.edu/wheatblast, also is routinely updated with information about the disease.

Kansas State University's wheat blast research is funded by USDA's National Institute of Food and Agriculture. Recent research on this project was published online in the academic journal Crop Science in January 2016.

Kansas State University researchers have received $6.5 million from the U.S. Department of Agriculture since 2009 to keep a devastating wheat fungus out of the country's farm fields.