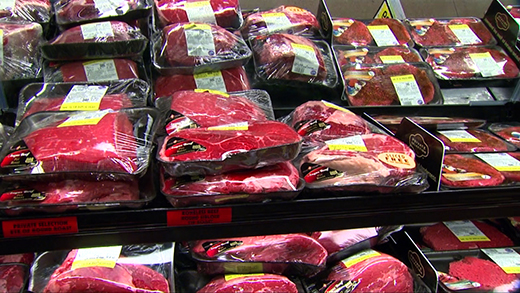 Research by Kansas State University meat scientists confirms that freezing of strip loin and inside round steaks can make the meat more tender. | Download this photo.

MANHATTAN — Meat lovers may find it appealing to take a fresh steak from the store right to their home grill, but research continues to show that freezing the steak and cooking it later actually improves the tenderness of certain cuts.

Kansas State University meat scientists say they've confirmed previous findings about the impact of freezing strip loin and inside round steaks. In a recent study, they tested six major muscles from the hind quarter and found that those two cuts were as much as 10 percent more tender after freezing.

Steaks were evaluated for tenderness using the Warner-Bratzler Shear Force test, which measures the force needed to shear muscles.

"So the question we had was why did these two cuts react while the other four did not," said John Unruh, professor of animal sciences and industry.

Part of the answer, he noted, is moisture loss. "These two muscles, for some reason, did not lose as much moisture during freezing as the other four," Unruh said.

Unruh and a team of graduate students also evaluated 125 paired strip loin steaks available in a retail setting. The steaks were frozen, thawed and evaluated for tenderness.

"The strip loin steaks showed a 6 percent improvement in the Warner-Bratzler Shear Force test, indicating a more tender steak," Unruh said. "Moisture loss did occur, but it was low, about 2 percent."

In a related study, the scientists tested the tenderness of strip loin steaks being sold in retail grocery stores.

"We monitored the differences in these steaks at different times of the year and different quality grades, including Premium Choice, Choice and Select," Unruh said. "A higher percentage of the steaks in the higher quality category, Premium Choice, met Warner-Bratzler shear thresholds for tender or very tender."

Lower quality cuts were more likely to fluctuate in tenderness throughout the year, he said.

Unruh and his students will present their findings at the Kansas State University Cattleman's Day, which will take place March 4 in Manhattan. For more information on that event, visit asi.k-state.edu/species/beef/cattlemens-day.

Kansas State University researchers have found that freezing strip loin and inside round steaks makes those cuts as much as 10 percent more tender when it comes time to eat them.

"The strip loin steaks showed a 6 percent improvement in the Warner-Bratzler Shear Force test, indicating a more tender steak. Moisture loss did occur, but it was low, about 2 percent."