His political experience includes serving as an official of Costa Rica's Ministry of Foreign Affairs and as ambassador for Central American affairs and director of foreign policy. Solís has published more than 10 books and written many articles for newspapers and magazines.

Solís will be the second Costa Rican president to give a Landon Lecture, joining Oscar Arias Sanchez who spoke in 1987.

Solís' lecture will wrap up a busy spring of speakers for the historic lecture series. Three lectures are scheduled in April: 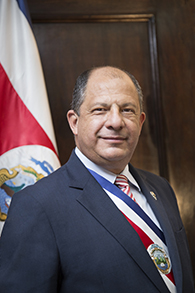 The president of Costa Rica, Luis Guillermo Solís, will deliver the spring semester's fourth Landon Lecture when he speaks Thursday, May 19. The lecture will be in Forum Hall at the K-State Student Union. A time will be announced later.