MANHATTAN — A Kansas State University graduate student had an opportunity to showcase her passions and talent to make an impact on the city of Des Moines, Iowa, in the prestigious RDG Design Residency.

Kelsey McDonough, a doctoral student in biological and agricultural engineering, was one of 10 students selected from the Midwest region to participate in the fifth annual RDG Design Residency in November 2015. This program, hosted by the Renaissance Design Group, attempts each year to bring new life to an already existing system and re-envision ways to solve old problems. The design competition annually assembles a team of the best and brightest young minds in key fields who collaborate with each other and community leaders to focus on a real-world space and opportunity to improve it.

McDonough, the only engineer on the team, was joined by teammates who specialized in marketing, architecture, planning, art, geography and more.

The process began with a long series of sponsor presentations. From artists to city managers to administrators of the Iowa Caucus, the stakeholders of Des Moines presented their city-related interests to the team. Following the presentations, McDonough and the other nine team members were told to go — no specifics, no instructions; they were simply told to make a positive change.

"We really wanted to address the issues that the stakeholders had presented to us," McDonough said. "It was all up to our imaginations to push the limits of what was possible socially and scientifically."

McDonough focused on improving the water quality of two prominent rivers in Des Moines that are polluted and heavily regulated by the Environmental Protection Agency. One of her roles included determining how to integrate stormwater treatment elements into the design that would reduce the volume of stormwater runoff entering the severely impaired rivers. As she worked with her teammates, they came up with design plans aimed at revitalizing downtown Des Moines.

"It was tough working with people from so many backgrounds," McDonough said. "There were so many ideas coming from so many different disciplines. We had to pull all the ideas together so we could actually have a tangible product that can be built and benefit the city."

After 48 short hours, the stakeholders of Des Moines gathered together once more to see what the team had come up with. Among them was Frank Cownie, the mayor of Des Moines.

The team's creation, Farms on 5th, proposed that the commuter city shut down one of its main arteries, Fifth Street, and make it into an urban farm the entire length of the city, connecting the urban area back to Iowa's agricultural roots. This project would bring volunteer opportunities, a way to build and create a community, provide parks for day care operations, allow for continuing education programs, implement a top-notch farmers market, and give the residents a safe and scenic place to walk, jog and bike. The currently gray, cement walls of many areas of downtown Des Moines would be converted into vertical farms as well. In addition, the team proposed creating low-income housing on currently unused parking decks in the Fifth Street area.

The team used a drone to film Des Moines and created a video, models, graphs and figures about the Farms on 5th concept. McDonough said the presentation went over very well; in fact, the mayor brought it to his staff the very next day. They are currently working to get select parts of the proposal implemented in Des Moines.

"What we got done really transcended my expectations of myself, and also what a group of people could get done in 48 hours," McDonough said. "It pushed me to think in a way I wouldn't have on my own."

McDonough, originally from Jamestown, Rhode Island, gleaned her interest in the natural environment from her youth spent sailing with her family around New England. An active member of her high school's sailing team, she would study, for the sake of the sport, ocean tidal and wind patterns to gain an advantage over the competition.

"I grew an appreciation for the natural environment and learned the importance of keeping the water clean and encouraging biodiversity of ecosystems," McDonough said. "I've always wanted that to persist and for the environment to stay healthy."

McDonough earned her bachelor's degree in biological and agricultural engineering from North Carolina State University. The summer prior to her graduation, she was awarded a National Science Foundation internship, which brought her to Kansas State University to study the effectiveness of tallgrass prairie vegetation in a bioretention cell retrofit outside of Kansas City.

Choosing Kansas State University for her graduate degrees, McDonough earned a master's in biological and agricultural engineering in December 2015. As a doctoral student, she is working with biological and agricultural engineering faculty members Stacy Hutchinson and Trisha Moore on projects that deal with understanding urban ecosystems in Kansas. McDonough wants to develop a method to cultivate more sustainable ecosystems and improve management of water systems in Kansas.

"I can't speak highly enough of Kelsey," Hutchinson said. "Her work is the foundation for a unified watershed water quality market program that can optimize the water quality and quantity treatment based on natural boundaries — not political boundaries." 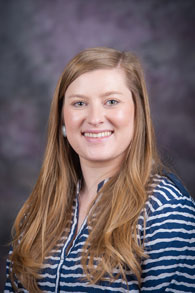 Kelsey McDonough, a doctoral student in biological and agricultural engineering at Kansas State University, was selected for the prestigious RDG Design Residency.