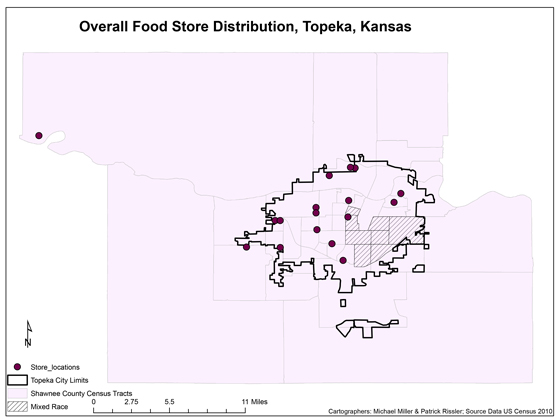 A Kansas State University study found a neighborhood's income and race composition may play a role in food deserts. A map of the overall food stores in Topeka, Kansas, shows an absence of stores in the inner-city neighborhoods. | Download this photo.

MANHATTAN — Average neighborhood income may play a role in creating food deserts in cities of all sizes, according to a Kansas State University study.

"The problems and dynamics happening in large metropolitan areas also are happening in smaller cities like Topeka, Kansas," Miller said. "Inner-city neighborhoods are severely lacking in food stores, and race and income seem to be important factors of that."

Miller used U.S. Census tract data to map neighborhoods in Topeka according to racial composition and income. Each tract contained around 3,000 people. Miller found that the geographic size of each tract was smaller in the inner-city areas and larger toward the city limits, suggesting a greater population density in the center of the city. Then he looked at racial composition of the primary head of household and average household income of those tracts.

"The neighborhoods with more racial minorities in the inner-city tracts — inner-city neighborhoods — tended to have lower incomes," Miller said. "Then as you move away from the inner city, we see incomes go up to the middle and high categories, neighborhoods get much wider and as you get to the large tracts on the outskirts, there are high incomes and a very, very high distribution of white households."

"The very people who need the stores close because they have low income and not much transportation find themselves further away from the stores," Miller said.

According to Miller, many complicated social factors cause food deserts and food insecurity in the U.S. Among the social factors, Miller said, is neighborhood disinvestment or lack of a foreseeable profit in the area.

"Just being around Topeka, you can see pretty clearly where the investment is and where the growth is," Miller said. "Business and commerce are directed away from those inner-city areas."

According to Miller, the solution to this problem is not as simple as dropping a store in the middle of a low-income neighborhood and expecting customers to purchase food there. The store has to appeal to the customers.

"Part of food security is having culturally appropriate foods available," Miller said. "If you open an organic food store in the middle of a low-income neighborhood, people may not go in and buy the food because they are not used to it. Food patterns and buying practices are really engrained in a lot of families."

Miller said infrastructure and planning is another roadblock that can affect access to food stores in inner cities.

"Three miles is not that far to walk, but if you have to cross highways and dangerous neighborhoods where the crime rate is high, that's going to make it more difficult," Miller said.

Miller intended the study to be a preliminary look at how food is distributed and how it shapes our society, neighborhoods and health outcomes so solutions can be explored.

"It is a complicated problem so no one is to blame," Miller said. "I think the solution is dependent on what people think the roles of the city and the community are and what have been the successful interventions to make healthy food more accessible in other cities."

The sociology, anthropology and social work department is in Kansas State University's College of Arts & Sciences.

Since the conclusion of the research, one of the grocery stores in central Topeka announced it will close Feb. 13.

"The problems and dynamics happening in large metropolitan areas also are happening in smaller cities like Topeka, Kansas. Inner-city neighborhoods are severely lacking on food stores, and race and income seem to be important factors of that."