MANHATTAN — Fatty acids, well known to have a positive effect on human nutrition, may also one day help to protect pigs from a deadly virus.

Kansas State University researchers have proven that when swine feed contains medium chain fatty acids — a category of fatty acids known for being easily absorbed by a human body — those pigs will be able to fend off the porcine epidemic diarrhea virus, or PEDV, which claimed an estimated 8 million pigs in 2014.

Their research, however, is far from done as they try to figure out how to use the medium chain fatty acids at low enough levels to keep producers' feed costs down.

"We have confirmed that pretreating feed with the medium chain fatty acids protects pigs from infection," said Cassie Jones, an assistant professor of grain science and industry at Kansas State University.

Until recently, researchers did not know that feed and feed ingredients could act as a vehicle to transfer PEDV. More than a dozen researchers at Kansas State University and Iowa State University have since been working together to determine methods to prevent or eliminate PEDV from feed.

"In our trial, we treated feed with a mixture of medium chain fatty acids, inoculated that feed with PEDV, and then fed it to animals under carefully controlled conditions," said Roger Cochrane, a Kansas State University doctoral candidate in grain science and industry. "This mixture protected the animals from the PED virus."

They have since tested with an inclusion level of 1 percent, with the same positive results, and plan to eventually test feed that is treated at even lower levels.

"We're hoping to find a formulation that is practical for U.S. producer's feed budgets," Jones said.

PEDV is particularly viral and Jones says that even a thimble full of feces from an infected pig contains enough of the virus to infect 20, 24-ton trucks of feed — or approximately 500 tons.

"That level of pathogenicity is the source of our concern from the feed mill perspective," Jones said. "There may be a high likelihood of cross-contamination. We're talking about a minuscule amount of fecal material. We are trying to focus on what we can do during ingredient receiving, manufacturing and feed delivery to prevent that fecal material from entering the mill or being infectious in the feed."

European farmers have dealt with PEDV since the 1970s, but it wasn't until 2013 that the costly disease was discovered in a U.S. herd. The disease is not transmissible between species or humans, and it is not a threat to the safety of food.

Kansas State University's research on PEDV and medium chain fatty acids is funded by the U.S. Department of Agriculture and the National Pork Board, with support from other industry partners. The research team received a patent in 2014 for its work, which is scheduled for publication in an upcoming issue of the Journal of Swine Health and Production. 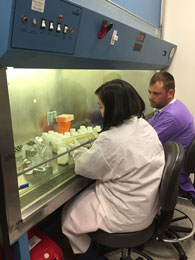 Kansas State University researchers have proven that when swine feed contains medium chain fatty acids, those pigs will be able to fend off the porcine epidemic diarrhea virus, or PEDV, which claimed an estimated 8 million pigs in 2014.

"That level of pathogenicity of PEDV is the source of our concern from the feed mile perspective. There may be a high likelihood of cross-contamination."