CEO of Aspera Inc. to speak on birth and growth of high-speed transport platform for Eyestone Lecture

The event is part of the College of Engineering's Eyestone Lecture Series and is open to the public.

Munson, formerly of Junction City, is a 1996 graduate of Kansas State University in electrical engineering and physics, where she was a Goldwater scholar for achievement in science and mathematics. She was later a Fulbright scholar at Cambridge University where she received a postgraduate diploma in computer science.

She is the co-inventor of Aspera's fasp™ transport technology, responsible for overseeing the company's direction in collaboration with co-founder Serban Simu. Munson was a software engineer in research and start-up companies, including the IBM Almaden Research center, before founding Aspera in 2004.

Munson's lecture will highlight how engineering brings fundamental solutions to scientific and societal "big problems," focusing on the example of the birth and growth of Aspera's high-speed transport platform. She will address the origin of the company's transport technology, the invention of the platform, financial enablement and evolution in an ecosystem of distributed cloud computing, and the explosion of data.

"This will be a timely and compelling topic with today's technological challenges as they relate to data storage and access," said Darren Dawson, dean of the College of Engineering. "It will also be an opportunity for our students and faculty to hear firsthand from a highly successful entrepreneur, inventor and businesswoman."

Munson was the 2006 K-State College of Engineering Alumni Fellow — the youngest recipient on record. She has been named Media and Broadcast Technologist of the Year for 2016, and has also received national achievement awards from Glamour magazine and USA Today. Munson is a frequent speaker on technologies and trends around big data transport, cloud infrastructure and mobility.

The Eyestone Lecture Series, established in 2000, is funded by an endowment of the late Fred and Mona Eyestone. Fred Eyestone, a 1941 K-State graduate in electrical engineering, was a member of the College of Engineering Advisory Council and a Distinguished Service Award recipient. 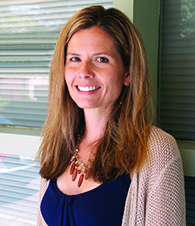