MANHATTAN — Archeological evidence indicates that humans have been making pottery for at least 20,000 years. Ceramics is experiencing a renaissance, and Kansas State University's Andrew Casto is offering a fresh perspective on this ancient art form.

A coveted Emerging Artist award from the National Council on Education for the Ceramic Arts in 2015 brought Casto, assistant professor art, a new degree of attention. Galleria Salvatore Lanteri in Milan, Italy, offered Casto his first international solo exhibition, hosting 14 of Casto's pieces in January and February 2016. He has exhibited work in several international venues with other artists, but the solo show is a career milestone.

"It takes a long time before you're invited to do shows like this, particularly in a cosmopolitan city like Milan," Casto said. "It's great to participate in dialog with artists and faculty there — it's an exciting opportunity."

Casto's work generates such interest because of its originality. His pieces are abstract, but a viewer might see a visual echo of something familiar. Does the piece resemble coral? Glinting gilded pockets or bright colors that adorn sections of the porcelain draw the eye. The shape becomes more recognizable as the viewer gazes — a process of accretion that mimics the process of developing the pieces. Casto first sculpts the clay and allows it to dry. Then he glazes, fires, adds more glaze — including color and gilding — and fires again.

Some of the final products resemble a melting object or a natural form. The works include discarded remnants, things Casto finds in nature and autobiographical tidbits. One piece, for instance, resembles the pork crown roast his brother brought to a family gathering.

"As artists, we're always sort of taking things in, absorbing stimuli, and that comes out in the work we do," Casto said.

"To me it becomes interesting to have the work be a reflection of the place I'm in at a given time. I'm more purposeful with that at times than others," he said.

Casto acknowledges ceramic history as he pushes the medium in new directions — something the European ceramics community struggles to do. The gold luster he applies to areas of his sculptures is an example.

"Think of the ornate ceramics your grandmother would have in a cabinet, of tea sets with gilded edges. It's exciting to use those materials in a different way," Casto said.

"It's hard to think of being original in a 20,000-year-old art medium. Artists in Europe are more tied to established traditions than Americans, and they are often impressed or surprised by our ability to make moves or create work that is outside traditional references," he said.

Casto is investigating 3-D printing as a new way to make ceramic art. He can print objects and coat them in clay with a conventional 3-D printer, and he's experimenting with a clay printer that allows him to design objects on a computer and print them in clay.

"It can be a whole different way of thinking spatially and addressing formal concerns with object construction," Casto said.

"One night I had pieces on the wheel and was working on different things with the 3-D printers. I thought, 'This is amazing: I've got two robots making things for me even as I use methods of construction people have been using thousands of years,'" he said.

Matthew Gaynor, head of the Kansas State University art department, is not surprised by Casto's success.

"Professor Casto's work, both aesthetically and technologically, puts him at the forefront of young artists in his medium, continuing the long history of K-State as a leader in the ceramics field and as a place to study for students who have a desire to excel," Gaynor said.

The best creative minds also boost fields outside the arts.

“There is this idea that within STEM research, there needs to be emphasis on creativity," Casto said. "Top-quality artists assist in these efforts by creating a vibrant community of creativity." 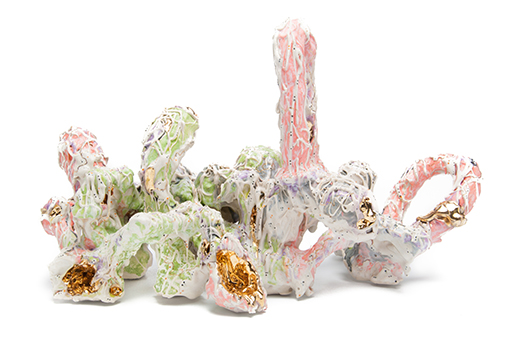 "It's hard to think of being original in a 20,000-year-old art medium. Artists in Europe are more tied to established traditions than Americans, and they are often impressed or surprised by our ability to make moves or create work that is outside traditional references."