MANHATTAN — A Kansas State University professor has earned two Grammy nominations for his solo performance on an album with the Kansas City Chorale.

Bryan Pinkall, assistant professor of music in the School of Music, Theater, and Dance, and the Kansas City Chorale were nominated in the categories of Best Choral Performance and Best Engineered Album for their album "Rachmaninoff: All-Night Vigil."

"I was ecstatic to hear the news of the nominations," Pinkall said. "Being nominated is so difficult because there are so many recordings produced every year."

Pinkall, a member of the Kansas City Chorale since 2012, sings an introit to one of the movements of Rachmaninoff's "All-Night Vigil."

"Charles Bruffy, our conductor and one of the most brilliant musicians I have ever known, put great care into the creation of the album," Pinkall said. "We work hard to make music that is refined and musical, hoping that our audiences will appreciate the care that we put in to every piece," Pinkall said.

"It is the 100th anniversary of its composition, and it is one of the most loved pieces of choral music," Pinkall said.

Pinkall's achievements also include serving as manager of performance operations and direction for the Emmy-winning 2014 Sochi Olympic Winter Games Opening Ceremony, and managing the production of Pope Francis' mass in Philadelphia. 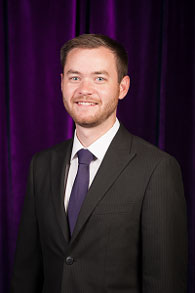 Bryan Pinkall, associate professor of music in the School of Music, Theater, and Dance. Download this photo.