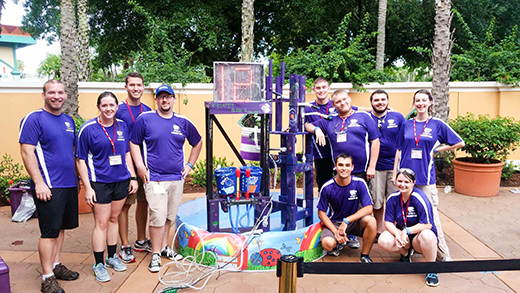 Fountain Wars team participants next to the fountain they built for the Fountain Wars Competition in Orlando, Florida. | Download this photo.

The student team, advised by Trisha Moore, assistant professor of biological and agricultural engineering, received a $1,000 prize and trophy for its entry in the Fountain Wars Competition, a segment of the G.B. Gunlogson Student Environmental Design Competition.

The July outdoor event was a hands-on, real-time design contest in which students designed and modeled their entry before the American Society of Agricultural and Biological Engineering's annual international meeting.

Teams arrived at the competition with a design for their fountain, along with the necessary PVC pipe, couplers, fittings, valves, nozzles and pumps to assemble their design. After making a brief, marketing-style promotion of their design, each team constructed its system in 120 minutes, in the rain — an extra challenge this year.

The "rescuing the dolphin" task included two PVC pipes next to each other, one of which had a plastic dolphin bath toy lying in the bottom. Teams were challenged to shoot water through a hole into the adjoining tube to raise the dolphin and push it out of the apparatus. All teams were able to inject water into the pipe, but the next steps were trickier.

"For most teams, once the dolphin rose to the top of the tube, it would sit on the cushion of water and not come out," Moore said. "Because our team members spent plenty of time testing and adjusting their design, they were one of the only teams to fully accomplish the task."

The team's design concept for the task earned an additional award: most innovative design.

The awards were based on combined scores of a written report, oral presentation, construction, the technical tasks and an aesthetic display.

While most teams themed their aesthetic display around Disney characters because the event was at Walt Disney World, the Kansas State University team took a different approach. Inspired by the "rescue the dolphin" task and a shared affinity for "The Hitchhiker's Guide to the Galaxy," a comedy science fiction series by Douglas Adams, the team designed an interactive display around an event in the series when dolphins use rockets to attempt escaping the earth's impending destruction.

The team installed an electronic timer that counted down 20 seconds while two people shot water into buckets. At the end of the countdown, the buckets fell and landed on stomp-rockets, so whichever person had been more successful at shooting water into their bucket would have more force to drive their stomp-rocket higher. This concept helped the team earn a second most innovative design award.

"They're just a good group of students. They were cheering on the other teams while they were doing their tasks," Moore said. "There were some moments when it was up to the judges to decide if elements of their fountain were in the bounds of the rules — they received 'most innovative design' for a reason — but they were respectful in letting the judges make their decisions."

"Aaron was one of the team's primary recruiters, and I think having that commonality with other students helped him to engage new participants and lead the team with a sense of camaraderie," Moore said. "During their year of designing — and also at the competition — I noticed the team jelled really well and had an excellent dynamic."

In addition to Akin, the following students also participated in this year's Fountain Wars:

A Kansas State University team earned four awards and placed second overall in an international design-build competition in Orlando, Florida. The student team, advised by Trisha Moore, assistant professor of biological and agricultural engineering, received a $1,000 prize and trophy for its entry in the Fountain Wars Competition.