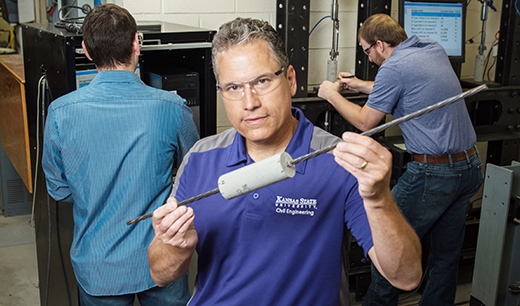 Bob Peterman, professor of civil engineering, holds a test specimen used to evaluate the bond between steel and concrete in his laboratory at Kansas State University. | Download this photo.

Pretensioned concrete railroad ties use steel indented wires that are stretched before being cast into concrete. When the wires are saw-cut, they spring back to compress the concrete member with approximately 140,000 pounds of longitudinal force. Bob Peterman, professor of civil engineering, and his graduate student, Matthew Arnold, Shawnee, developed a test to determine how well the concrete wires will bond with the surrounding concrete.

ASTM International, formerly the American Society for Testing and Materials, standardized Peterman's test as ASTM A1096 in 2015. It will be used by manufacturers across the globe.

"I feel honored that our work was adopted as an ASTM standard, and I'm excited by how quickly it happened," Peterman said. "Sometimes, procedures take a long time to be adopted as standard, but the process accelerated because the industry really wants a test like this."

Peterman's attributes the speed of his solution's adoption to support from pre-stress concrete producers and pre-stress steel wire suppliers.

"It's important in construction to supply a quality product and, unfortunately, when something goes wrong, there is plenty of finger-pointing," Peterman said. "Because this standard allows a pre-caster to specify a certain bond quality at the time of purchase, it helps to delineate responsibility, which is something both sides really wanted."

Peterman's procedure could potentially save the industry millions of dollars per year by allowing producers to specify and receive wire reinforcements that are used to fabricate concrete railroad ties that have a uniform factor of safety against different failure modes.

"The railroad industry has been developed through a series of educated guesses, putting the product on the rails and seeing how it performs. Unfortunately, sometimes things don't perform well," Peterman said. "If they catch it at the plant, it may be a $75-$100 error. If it gets to the track, fails and needs replacing, it will cost 20 times that amount. With the case of railroad ties, you can produce millions before receiving much feedback."

Concrete ties are typically spaced 24 inches apart, so there are 2,640 ties per mile. In Europe, more than 90 percent of the ties are concrete, but in the U.S., the majority of ties are wooden, with concrete ties comprising just 8 percent. The U.S. continues to mostly use wooden ties because of their lower production costs and because concrete ties cannot presently be interspersed with wooden ties due to differences in stiffness.

"Running a train on wooden ties versus concrete ties could be compared to riding a bike through the grass versus riding it on concrete," Peterman said. "It's stiffer and doesn't deflect as much, so you achieve better fuel economy."

Peterman and his student team added weight to various concrete members that encapsulated 15 different reinforcing steels to test whether the wires would still hold without pulling through the concrete.

The research that led to the test was made possible as a result of a device developed in Kansas State University's Non-Contact Precision Measurements Laboratory by researchers Terry Beck, professor of mechanical engineering; Weixin Zhao, doctoral student in mechanical engineering; Chih-Hang "John" Wu, associate professor of industrial manufacturing systems engineering; and Peterman. The device was designed to optically measure transfer length: the distance from the end of the tie to the point at which it is able to carry its full load bearing capacity. The device was awarded a patent in 2014.

"Really short transfer lengths can actually lead to bursting, so it's kind of the Goldilocks approach — you don't want it to be too short or too long," Peterman said. "I tell people it's like 'CSI Concrete,' because we're trying to figure out how it all works."

Peterman launched the project in 2002 through a research association with Beck and Wu, along with initial seed funding from Kansas State University's University Transportation Center and Advanced Manufacturing Institute. In 2011, the funding increased with a $2.1 million grant from the Federal Railroad Administration. 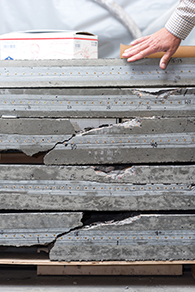 Bob Peterman, professor of civil engineering, shows a stack of railroad ties that have been stressed to the point of fracture in the patented test that he developed along with other researchers at Kansas State University.