A movie of the microworld: Physicists create nanoparticle picture series 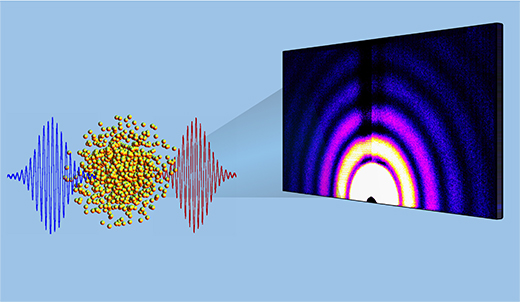 Kansas State University physicists collaboratively have developed a method for taking X-ray images that show the explosion of superheated nanoparticles at the femtosecond level. | Download this photo.

MANHATTAN — Think of it as a microscopic movie: A sequence of X-ray images shows the explosion of superheated nanoparticles. The picture series reveals how the atoms in these particles move, how they form plasma and how the particles change shape.

The method of taking these pictures is a collaborative creation that involved Kansas State University researchers Artem Rudenko and Daniel Rolles, both assistant professors of physics.

The movies help scientists understand interactions of intense laser light with matter. But even more importantly, these experiments lead the way to filming various processes that involve ultrafast dynamics of microscopic samples, such as the formation of aerosols — which play a major role in climate models — or laser-driven fusion.

"We can create a real movie of the microworld," Rudenko said. "The key development is that now we can take sequences of pictures on the nanoscale."

Rudenko and Rolles — both affiliated with the university's James R. Macdonald Laboratory — collaborated with researchers at SLAC National Accelerator Laboratory at Stanford University, Argonne National Laboratory and the Max Planck Institutes in Germany. Their publication, "Femtosecond and nanometre visualization of structural dynamics in superheated nanoparticles," appears in Nature Photonics.

In this work, the collaboration used intense lasers to heat xenon nanoscale clusters and then took a series of X-ray pictures to show what happened to the particles. The picture series became a movie of how these objects move at the level of femtoseconds, which are one-millionth of a billionth of a second.

"What makes nano so interesting is that the behavior for many things changes when you get to the nanoscale," Rolles said. "Nano-objects bridge the gap between bulk matter and individual atoms or molecules. This research helps us as we try to understand the behavior of nano-objects and how they change shape and properties within extremely short times."

The pictures of the nanoparticles cannot be taken with normal optical light, but must be taken with X-rays because X-ray light has nanometer wavelengths that enable researchers to view nanoscale objects, Rolles said. The light wavelength must match the size of the object.

The photo-taking method and the pictures it produces have numerous applications in physics and chemistry, Rolles said. The method is also valuable for visualizing laser interactions with nanoparticles and for the rapidly developing field of nanoplasmonics, in which the properties of nanoparticles are manipulated with intense light fields. This may help to build next-generation electronics.

"Light-driven electronics can be much faster than conventional electronics because the key processes will be driven by light, which can be extremely fast," Rudenko said. "This research has big potential for optoelectronics, but in order to improve technology, we need to know how a laser drives those nanoparticles. The movie-making technology is an important step in this direction."

Rudenko and Rolles are continuing to improve the moviemaking process. In collaboration with the university's soft matter physics group, they have extended the range of samples, which can be put into the X-ray machine and now can produce movies of gold and silica nanoparticles.

The James R. Macdonald Laboratory and the physics department are part of the College of Arts & Sciences.

Kansas State University physicists collaboratively have developed a method for taking X-ray images that show the explosion of superheated nanoparticles at the femtosecond level.

Kansas State University physicists collaboratively have developed a method for taking a series of X-ray images that show the explosion of superheated nanoparticles at the femtosecond level.

"This research has big potential for optoelectronics, but in order to improve technology, we need to know how a laser drives those nanoparticles. The moviemaking technology is an important step in this direction."