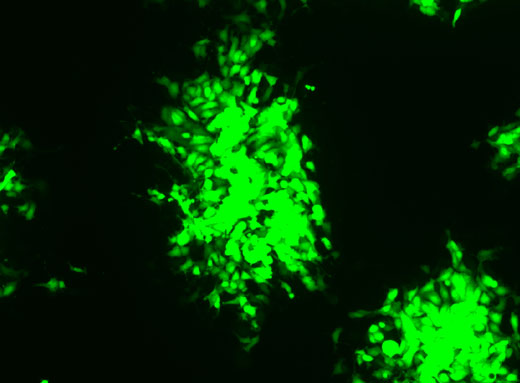 Myxoma virus, a rabbit-specific virus related to the smallpox virus, infects rabbit cells by inhibiting rabbits' cellular virus-defenses. The mutated strain is not able to establish an active infection like the one shown here. | Download this photo.

MANHATTAN — A naturally-occurring mutation in a rabbit-specific virus — related to the smallpox virus —weakens the virus and may give insight to understanding pathogen evolution, according to a Kansas State University study.

"Our findings may help scientists predict which viruses can pose threats to humans," said Stefan Rothenburg, assistant professor in the Division of Biology and principal investigator for the study. "It is a big step toward understanding the molecular basis of host-virus interaction."

Rothenburg; microbiology doctoral students Chen Peng, China, and Sherry Haller, Topeka;and collaborators from the University of Florida, recently published a study in the Proceedings of the National Academy of Sciences of the United States of America about the function of an immune-regulating protein from myxoma virus, called M156. According to Rothenburg, M156 inhibits an antiviral protein from the host in a species-specific fashion. The researchers also characterized a loss-of-function mutation in M156 that makes the once severe virus weaker.

"We are still very ignorant when it comes to predicting which viruses pose threats to humans and animals," Rothenburg said. "We don't fully understand the molecular mechanisms. This is why it is important to study a very well established host-virus system like myxoma virus in the European rabbit as a model for human viruses and why understanding this mutation is important."

Myxoma virus was intentionally released in Australia in the 1950s to control invasive rabbits. At that time, the mortality rate of virus infection was nearly 100 percent and the release led to a huge decrease in the European rabbit population. According to Rothenburg, within a few years, two things happened that stunned scientists at the time: Myxoma virus mutated to become weaker, or attenuated, and the rabbits evolved to become more resistant to the virus.

"These two phenomena together led to a rebound of the rabbit population," Rothenburg said. "The scientists found that the naturally evolved weakening of the virus is actually beneficial for the virus because infected rabbits lived longer and were able to better transmit the virus."

Rothenburg further said that on the population level, this is probably the best-known example for a host-virus coevolution in nature, but it lacked a molecular explanation until this study.

"The virus has an evolutionary advantage to maintain this mutation because it is found in more than 50 percent of the Australian virus isolates," Peng said.

The researchers found that only rabbit PKR was inhibited by M156 but not PKR from other mammals, which may contribute to the reason why myxoma virus only causes disease in rabbits. According to Rothenburg, the interaction of the host and virus proteins is like a lock and a key where the lock is PKR and the virus inhibitor is the key. If either lock or key change, the virus cannot establish an active infection in the host, he said.

Rothenburg's next step is to look at myxoma strains that were illegally released in Europe for the same purpose — to see if there are mutations in PKR inhibitors with similar effects. In addition, the Rothenburg lab is using the knowledge gained from the current study to modify myxoma virus with the goal to enhance the virus's oncolytic activity and to expand the spectrum of cancer forms that can be destroyed by myxoma virus.

"Our findings are important because we can use the gained knowledge for examining pathogens that concern human health," Rothenburg said. "Those include viruses such as influenza or Ebola viruses, which can jump from animals into the human population and also counteract their hosts' immune system, including the inhibition of PKR. Investigating species-specific interactions might yield valuable information about which viruses pose future threats."

This study was partly funded by Kansas State University's Johnson Cancer Research Center, which provided summer stipends for Peng and Haller, and a grant from the National Institutes of Health to Rothenburg.

The Division of Biology is in the College of Arts & Sciences at Kansas State University.

"We don't fully understand the molecular mechanisms. This is why it is important to study a very well established host-virus system like myxoma virus in the European rabbit as a model for human viruses and why understanding this mutation is important."

— Stefan Rothenburg, assistant professor in the Division of Biology