MANHATTAN — A Kansas State University master's student in communication studies is a regional award winner for excelling in teaching and mentoring.

The award recognizes graduate students who excel in classroom teaching and promote awareness of graduate teaching contributions to the university's scholarship and the teaching mission. Hanna received a $750 honorarium and represented Kansas State University at the annual meeting of the Midwestern Association of Graduate Schools, April 9-11, in Chicago. She also presented and discussed her teaching philosophy at the annual meeting.

An award winner is selected at both the master's and doctoral levels, with each member institute of the association able to nominate one student in each category.

"Being the recipient of the Midwest Association of Graduate Schools' Excellence in Teaching Award is not something I ever expected to happen," Hanna said. "Winning this award only serves as a reminder that I have plenty of growing and developing to do as a teacher and I look forward to that journey."

As a graduate teaching assistant, Hanna has independently instructed 10 Public Speaking courses. Six of those classes were part of the university's Pilots Program, an intensive retention program for first-year students. About 60 percent of the program's participants are first-generation college students.

"Being able to work with the Pilots Program has been one of the best experiences I could have asked for as a developing teacher," Hanna said. "Although most of them are probably unaware, their kind and constructive comments on teaching evaluations have played a significant role in defining and shaping who I want to be as a teacher."

During her two years at Kansas State University, Hanna has also served as a member of the Honor Council, which has helped mold how she approaches plagiarism and academic dishonesty in the classroom. Surrounding communicative constructions of identity, the majority of the research Hanna conducts heavily influences how she thinks about her role as an instructor. She has presented her research at both local and national conferences. Hanna is currently completing her thesis project and beginning preparations for attending a doctoral program in communication studies in the fall. 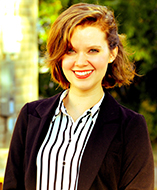 Katrina Hanna, master's student in communication studies at Kansas State University, has been named the recipient of the 2016 Midwestern Association of Graduate School Excellence in Teach Award for the master's level.

Kansas State University's Katrina Hanna is the winner of the 2016 Excellence in Teaching Award at the master's level from the Midwestern Association of Graduate Schools.