Aaron Messerla, junior in mathematics and music, Riley, and Raquel Ortega, junior in chemistry, Wichita, have each received an honorable mention in the prestigious scholarship competition.

Established by Congress in 1986 to honor Sen. Barry M. Goldwater from Arizona, the scholarship was awarded to 252 college students for the 2016-2017 school year. Awardees receive up to $7,500 annually for college-related expenses. With 73 Goldwater scholars to date, Kansas State University ranks first among the nation's 415 state-supported universities.

Schieferecke, Messerla and Ortega, all students in the College of Arts & Sciences, are conducting research in mathematics, science or engineering, and intend to pursue related careers, one of the scholarship's requirements.

Working in the lab of Stefan Rothenburg in the Division of Biology, Schieferecke is testing the cancer-killing effectiveness of a modified strain of myxoma virus. Schieferecke also is working to generate and characterize improved oncolytic poxviruses, which he said may have the potential to selectively kill some human tumors while leaving normal body tissues unharmed.

"Receiving the Barry Goldwater Scholarship is very special for me. It represents how constant perseverance and living the Wildcat Way can lead to making accomplishments that once seemed impossible," Schieferecke said. "I feel extremely grateful for all of the opportunities I have had as a student at K-State, which have made it possible for me to receive such an honor."

Schieferecke is president of the K-State Microbiology Club, the science writer for the K-State Cancer Fighters Club, and a member of the Virology Journal Club, National Society of Collegiate Scholars and K-State Parachute Club. He also was a member of Silver Key, the sophomore honorary. He has presented his research at the Undergraduate Research Day at the Kansas Capitol, won top poster presentation awards at the 2015 and 2016 K-INBRE symposia, and received an Undergraduate Research and Mentoring Ecological Genomics Travel Fellowship. He also is a K-INBRE Scholar, a Dane G. Hansen Leaders of Tomorrow Scholar, and the recipient of three Johnson Cancer Research Awards, a College of Arts & Sciences Undergraduate Research Award, the Division of Biology's Most Promising Student Award, and a First Year Academic Performance Award from Gamma Sigma Delta, the agriculture honor society. In addition, he's received a SCTE Undergraduate Research Fellowship, a June Hull Sherrid Cancer Biology Scholarship, the Kansas State University Foundation Plus Award and the Alumni Legacy Award.

Schieferecke was selected for a Summer Undergraduate Research Fellowship in virology and gene therapy at the Mayo Clinic in Rochester, Minnesota, this summer. A graduate of Bennington High School, he is the son of Larry and Janet Schieferecke.

A member of Pi Mu Epsilon math honor society and the National Society of Collegiate Scholars, Messerla is also a mathematics department I-Center Scholar and a member of the university's Concert Band and Cat Band. He has received a College of Arts & Sciences Undergraduate Research Scholarship, Putnam Scholarship, Fort Riley Combined Scholarship, James R. Foster Jr. Memorial Arts and Sciences Scholarship, Thomas L. and Elouise J. Miller Scholarship for Excellence in Mathematics, Riley County 4-H Foundation Scholarship, and the Mary Lou Gibbs State 4-H Scholarship. He also was recognized as an honorable mention in the 2015 Goldwater competition. A graduate of Riley County High School, he is the son of Dave and Dawn Messerla, Riley.

Ortega works in the lab of Stefan Bossmann, professor of chemistry. She is collaborating to synthesize and characterize a nanoparticle that could potentially encapsulate lytic peptides that could be used as anti-cancer drugs and provide a more efficacious release of drugs at a tumor site.

The vice president of the American Red Cross Club and a member of the Pre-Medicine Club, Ortega also is a member of the Developing Scholars Program and the National Society of Collegiate Scholars. She is an organic chemistry grader. She received the Jerry and Judy Reed Chemistry Scholarship, the Undergraduate Cancer Research Award, the Developing Scholars Program Promise Award, the Kansas State University Fairchild Scholarship and the Phi Lambda Upsilon Chemistry Scholarship. She gave oral presentations at the American Chemical Society Midwest Regional Conference in 2014 and 2015, was a co-presenter at Undergraduate Research Day at the Capitol in 2014, and was a presenter at the Developing Scholars Symposium in 2014 and 2015. A graduate of Goddard High School, she is the daughter of Bernardo and Teresa Ortega. 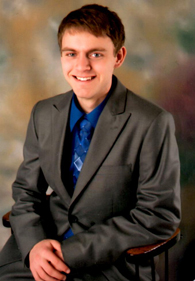 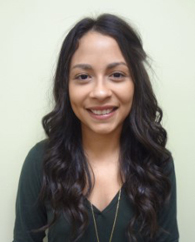 Adam Schieferecke, junior in microbiology and biochemistry, is the university's newest Barry M. Goldwater scholar. Aaron Messerla and Raquel Ortega have each received an honorable mention.