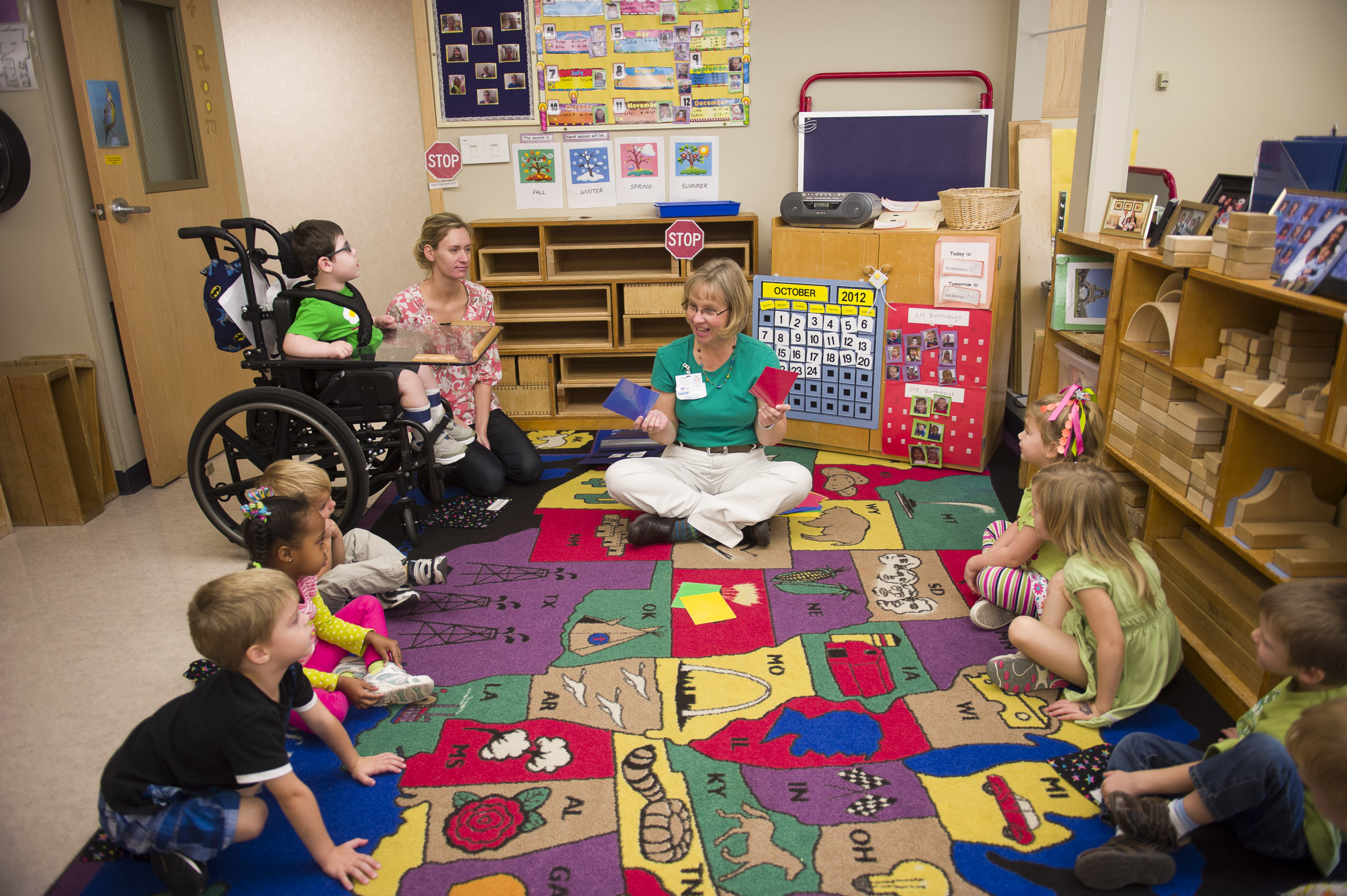 Select groups and activities that include a variety of children, suggests Bradford Wiles, so your child will learn to see the value in all people. Wiles, assistant professor at Kansas State University in early childhood development, explains that developing empathy for others has a positive effect on children and the adults they become. This classroom is made up of preschool children on the Manhattan campus. | Download this photo.

MANHATTAN — When a child feels valued, he sees values in others. When he realizes he has his own thoughts and emotions, he understands that others do, too. When his ideas and feelings are respected, he learns to respect them in others.

"As a parent, you want your child to understand and respect that other people have thoughts and feelings. It makes for healthier children who develop into happier adults," said Bradford Wiles, assistant professor in early childhood development and extension specialist at Kansas State University. His research and outreach focus on childhood cognitive and social-emotional development, theory of mind and emergent literacy.

"It's a much easier existence for children if they see value in everyone," he said. "When they start to get judgmental, things get so much harder for them."

Somewhere between the ages of 3 and 5, children start to develop the understanding that other people have thoughts and feelings, too. "When you understand that, and can take another person's perspective, that is part of empathy," Wiles said.

"When children learn to take another person's perspective and then empathize, they are much better equipped to successfully manage peer and adult interactions," Wiles said. "Empathy for others, whether they have special needs such as being in a wheelchair, or if they are just different from the child, has been demonstrated to have positive and long-lasting outcomes for children."

He gave an example: inclusive classrooms — those that mix typically developing children and those with special needs — promote children's development of empathy and understanding, which are crucial for navigating the social-emotional landscape of human development.

A parent is a model, Wiles points out, for simple tasks such as table manners or complex issues such as race.

Wiles gives other suggestions on how to help children learn empathy and tolerance:

• Book with diverse characters. Read a book and discuss with the child why characters acted as they did, ask how the child thinks the characters feel. "Encourage the child the put on the shoes of another character," Wiles said.

• Inclusive classrooms and play groups. Wiles recommends selecting groups for both that include a mix of cultures and backgrounds. "Kids don't care," he said, adding that he has seen unfortunate divisions even in the areas of political differences.

• Talk. Children are trying to figure out what everybody knows already, he said. Invite discussion with older children.

• Voice your expectations and aspirations for the child. "Don't burden them with aspirations for material success," he advises. But let them know you want them to appreciate all humanity and what different people and cultures offer.

• No TV. Wiles does not recommend TV for children under 2 years of age. After that, make sure programs depict the kind of traits you want your child to learn. Sassing parents? Probably not. Being respectful? Yes. He's a fan of "Sesame Street" for young children.

• Play materials that have multicultural aspect. For example, Wiles points out the array of musical instruments from all over the world that can become part of a child's toy box.

Week of the Young Child, sponsored by the National Association for the Education of Young Children April 12-18, focuses on the foundation for a child's success in school and later life.

Through research, scholarship, teaching and outreach, the faculty in the College of Human Ecology continually seek ways to nurture healthy children and families. Through his work with K-State Research and Extension and the School of Family Studies and Human Services, Wiles teaches families throughout the state.

(Part 5 in the series on Raising a Healthy Child will focus on communication and language skills.)