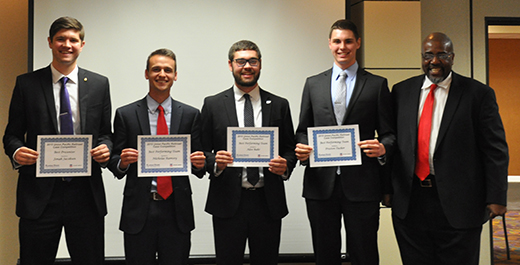 MANHATTAN — A team of students in the College of Business Administration won first place at Kansas State University's Union Pacific Case Competition, and will go on to compete against teams from other universities in a regional Union Pacific competition.

The competition saw teams take on a sales case that asked them to make decisions through financial analysis to better serve their customers. In addition to Union Pacific, the event was organized by the College of Business Administration's National Strategic Selling Institute, the Multicultural Business Student Association and the Professional Advantage program.

The winning team was made up of Nick Ramsey, junior in finance, Hutchinson; Alex Bahr, sophomore in communications, McPherson; Jonah Jacobson, junior in accounting, Olathe; and Preston Tucker, sophomore in business, Wichita. The team will now travel to the Union Pacific headquarters in Omaha on Friday, April 10, to take on the winning teams from the other regional college competitions, including Iowa State University, the University of Nebraska, Lincoln and the University of Nebraska, Omaha.