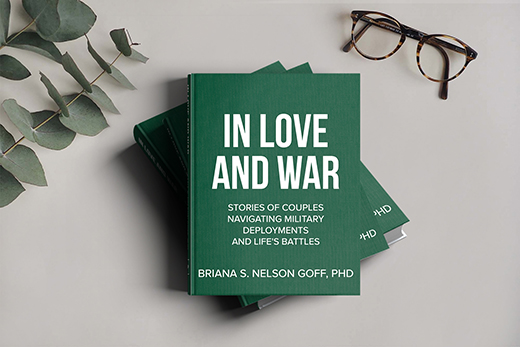 A research study that started in 2005 is culminating in a new book by Briana Nelson Goff, Kansas State University professor, on how eight military couples dealt with war deployments and trauma. "In Love and War: Stories of Couples Navigating Military Deployments and Life Battles" is scheduled for release in January 2023.

MANHATTAN — They say all is fair in love and war, but a soon-to-be-released book by a Kansas State University professor explores how war can turn love into battlefields for military couples.

"In Love and War: Stories of Couples Navigating Military Deployments and Life Battles" tells the stories of eight post-9/11 Army couples. The new book, to be released in January 2023 by New Degree Press, is written by Briana Nelson Goff, professor in the applied human sciences department of K-State's College of Health and Human Sciences.

Nelson Goff specializes in primary and secondary traumatic stress symptoms in trauma survivor couples, families and children, with a specific focus on military- and disaster-related traumatic events. Since 2004, she has had a particular interest in soldiers/veterans who served in Operation Iraqi Freedom and Operation Enduring Freedom and their partners to understand the individual and systemic effects of war deployments and trauma in couples.

Her book was nearly 20 years in the making.

"These couples were part of a research study I did on couples and trauma and were initially interviewed in 2005, with follow-up interviews completed in 2015," Nelson Goff said. "This allowed me and my team to gain their views and experiences over a 10-year span and provide perspectives not seen in other literature."

Her original study included 50 Army couples stationed at either Fort Riley or Fort Leavenworth, both in Kansas. The book tells the stories of eight of the original couples, who were still married in 2015 when Nelson Goff completed the follow-up interviews.

Military families make up less than 1% of the U.S. population but have endured extreme demands since 9/11 because of multiple combat deployments, life stressors and life-and-death events that most of us cannot imagine, Nelson Goff said.

After going through the couples' interviews, Nelson Goff believed it necessary to tell their stories in a way that would make their experiences available to a broader audience.

"I was inspired to write this book because we may talk about the resilience of our service members, veterans and their families, but we do not see inside to understand how they do it," Nelson Goff said. "As a researcher and therapist, I've seen the devastation of trauma and war, but I've also seen the resilience and hope that can spring from the depths of that destruction."

Some of the stories show the humor and resourcefulness that help soldiers, spouses and families navigate during deployments. Other stories show the depth of pain and difficulty faced by soldiers, including PTSD, depression and illnesses that disrupted their careers and brought challenges to their lives after the Army, Nelson Goff said.

Although each story is unique, Nelson Goff said there are common themes, like the stamina and resilience of those enduring deployments by the soldiers who deployed and the spouses and children who navigated the deployments, too.

"Our service members and their families have to manage boots on the ground in combat and on the homefront — the two sides of war that we often do not see," Nelson Goff said. "This book gives us a glimpse into their lives, but it also provides hope; hope that even after enduring combat, war disability, death, there is still life to live."

A K-State faculty member since 1998, Nelson Goff has experience in international trauma. As a member of a team funded through National Research Council grants, she worked in Bosnia-Herzegovina from 2000-2003 with survivors of the war in Bosnia, particularly children without parental care. She developed the Trauma Research, Education and Consultation at K-State, or TRECK, Team. This program, launched 1998, involved more than 200 graduate and undergraduate students through its operation. Nelson Goff and team members have published journal articles and presented their work across the U.S. and world on their research on trauma and couples. They also have provided workshops and education for non-professionals and community members throughout Kansas and clinical therapy services for trauma survivors and their family members.

From 2009 to 2017, Nelson Goff served as the founder and director of K-State's Institute for the Health and Security of Military Families, where she was in charge of developing collaborative educational, outreach and clinical services programs for military families in the state. Her work has earned several awards, including the U.S. Department of the Army Outstanding Civilian Service Award in 2014, Fort Riley Distinguished Trooper Award in 2015, K-State Excellence in Engagement Award in 2015, Department of the Army Chief of Staff Outstanding Civilian Service Award in 2016 and the K-State Distinguished Faculty Award for Mentoring of Undergraduate Students in Research in 2019.

Copies of "In Love and War: Stories of Couples Navigating Military Deployments and Life Battles" may be pre-ordered at briana-goff.presale.manuscripts.com.

"In Love and War: Stories of Couples Navigating Military Deployments and Life Battles" 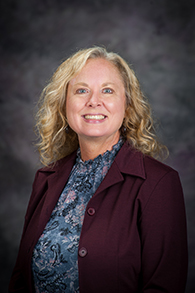 Kansas State University's Briana Nelson Goff is the author of the soon-to-be-released book "In Love and War: Stories of Couples Navigating Military Deployments and Life Battles."

Notable quote:
"Our service members and their families have to manage boots on the ground in combat and on the homefront — the two sides of war that we often do not see. This book gives us a glimpse into their lives, but it also provides hope; hope that even after enduring combat, war disability, death, there is still life to live."
— Briana Nelson Goff, professor and author, Kansas State University