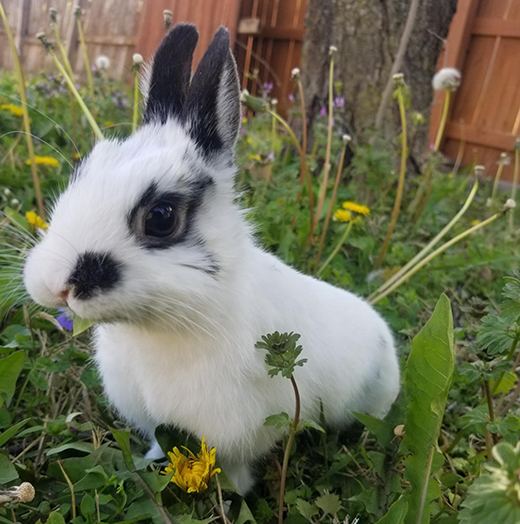 Two K-State virologists have identified potent small-molecule inhibitors with the potential to be developed as antiviral drugs for lagoviruses, which cause diseases that can be fatal in rabbits.

MANHATTAN — A discovery by researchers at Kansas State University's College of Veterinary Medicine may save the lives of wild and domestic rabbits threatened by the recent spread of lagovirus diseases, including Rabbit hemorrhagic disease and European brown hare syndrome.

Through collaboration with researchers from other Kansas Board of Regents universities, K-State virologists Yunjeong Kimand Kyeong-Ok Chang have identified potent small-molecule inhibitors with the potential to be developed as antiviral drugs for lagoviruses.

Kim said the development of an antiviral drug, such as the small-molecule inhibitors she and her team are working on, could provide a much-needed treatment for rabbits, especially those not found in the wild, afflicted with the lagovirus diseases.

"Pet rabbits and endangered rabbits in captive-breeding programs are an especially good target for antiviral treatment," Kim said. "Antiviral drugs may also be used as prevention when rabbits are exposed to the virus and need prompt protection."

While an antiviral strategy may prove to be the answer for both treatment and protection, the development of a viable drug will take time.

"The inhibitors have not been tested in live rabbits, so it still requires more research," Kim said. "We think these findings are encouraging, especially given how our inhibitor now under commercial development for feline infectious peritonitis virus is one of the same inhibitors shown to be effective against lagovirus proteases."

In July, the National Veterinary Service Laboratories confirmed a case of rabbit hemorrhagic disease virus type 2 in Kansas. This is the first instance of the highly contagious and often fatal disease in the state and there is no current treatment available.

Symptoms of the disease, which may or may not appear prior to death, can include lethargy, lack of appetite, neurological or respiratory distress, jaundice or weight loss. Death may come before the onset of symptoms or shortly after in a matter of a few days or weeks, although in some cases rabbits may survive.

"The first detection of rabbit hemorrhagic disease virus type 2 in Kansas was confirmed in a domestic rabbit, although most states west of Kansas have already reported the virus in wild rabbits and domestic rabbits," Kim said. "As it is hard to eradicate viruses from wild rabbit populations and this virus is very infectious, it is likely that we are going to see more cases in the future."