MANHATTAN — A new exhibition at the Kansas State University Marianna Kistler Beach Museum of Art explores how women artists have used their artworks to make their voices heard on issues that matter most to them.

"Voices: Women Artists in the Era of the Second Wave of Feminism," which opens Tuesday, Aug. 9, in the Beach Museum of Art's Mary Holton Seaton Gallery West, features women artists who have used their art to engage with feminist concerns or to flourish in a medium where male artists have ruled. The exhibition's works come from the museum's collection.

"The art and artists selected for this exhibition contribute to a conversation about the role of women in the 1960s and 1970s," said Theresa Ketterer, museum registrar and collections specialist and curator of the exhibition. "These artists tackled mediums considered masculine or used traditionally feminine mediums to make bold, meaningful statements. In their works, these women called out injustice or openly addressed topics taboo to their gender. They pushed the boundaries of art to create a dynamic dialogue for future generations."

Some artists and works in this exhibition, including Jenny Holzer, directly engage with feminist concerns that were part of the second wave of feminism, also known as the women's liberation movement. Holzer's "Inflammatory Essays" are screen prints on colored paper and feature equally colorful text. The essays were originally posted on buildings, fences and posts in New York City for the public to read. Holzer was arrested because the postings were considered vandalism.

Other artists, such as K-State art alumna Caroline Thorington, show how they were affected by the societal impact of the movement. Thorington's etching "The Three Moira" is a nude triple self-portrait about her pregnancy, a subject rarely depicted in media before the second wave of feminism. The exhibition also features women artists who gained prominence in masculine mediums, including Janet Kuemmerlein, a pioneer of the fiber arts movement, and Lee Krasner, who was on the frontlines of the abstract expressionist movement but overshadowed by her more famous artist husband, Jackson Pollock.

"Voices: Women Artists in the Era of the Second Wave of Feminism" can be viewed in person at the Beach Museum of Art through Dec. 16, 2023. The exhibition will be launched virtually at beach.k-state.edu/explore in September.

The museum, 701 Beach Lane, is on the southeast corner of the K-State campus. Hours are 10 a.m. to 5 p.m. on Tuesdays, Wednesdays and Fridays; 10 a.m. to 8 p.m. on Thursdays; and 11 a.m. to 4 p.m. on Saturdays. Free parking is available adjacent to the building. To catch a livestream event or view exhibitions online, go to beach.k-state.edu/explore, or watch videos of the museum's special programs and events on its YouTube channel, beach.k-state.edu/videos. For an events calendar in the Art in Motion annual program series, visit beach.k-state.edu/calendar. 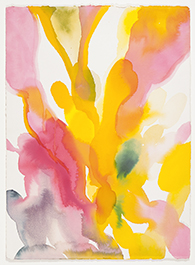 "Golden River, a watercolor on paper from 1974 by feminist artist Alice Barber, an abstract painter and lithographer, is part of the new Beach Museum of Art exhibition "Voices: Women Artists in the Era of the Second Wave of Feminism."