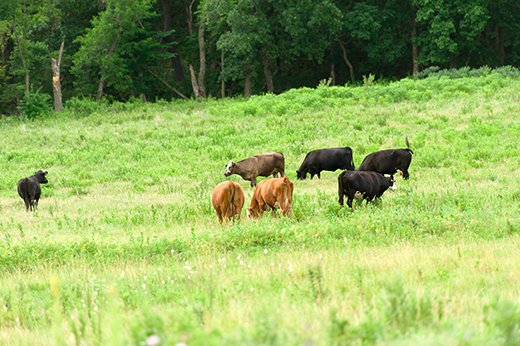 A recently published study on the urgent need for a bovine anaplasmosis vaccine involved researchers at Kansas State University's College of Veterinary Medicine.

MANHATTAN — A new study involving the College of Veterinary Medicine at Kansas State University is paving the way forward in controlling a devastating and costly cattle disease: bovine anaplasmosis.

The research, "Targeted mutagenesis in Anaplasma marginale to define virulence and vaccine development against bovine anaplasmosis," was published in May by scientists from K-States's diagnostic medicine and pathobiology department in PLOS Pathogens, a high-impact scientific journal. Co-authors include a group of scientists from St. George's University in the West Indies, Animal Diseases Research Unit of the U.S. Department of Agriculture in Pullman, Washington, and veterinary researchers from the anatomy and physiology, and clinical sciences departments at K-State.

"Our publication is unique and is the first in addressing the urgent need to develop a vaccine against an important tick-borne disease," said Roman Ganta, the study's senior/corresponding author and the principal investigator of the project. "Currently, there is no effective vaccine in the market, so this effort required innovative approaches in developing a vaccine."

Ganta, a university distinguished professor and director of the Center of Excellence for Vector-Borne Diseases in the College of Veterinary Medicine, said bovine anaplasmosis is a disease with major economic concerns not only in the United States, but around the world.

"Economic impact of the disease is in the billions of dollars of losses annually throughout the world," Ganta said. "The disease can spread rapidly by mechanical transmission routes, besides being transmitted by over 20 different tick species."

Ganta said anaplasmosis is the primary reason many producers feed cattle with the antibiotic supplement chlortetracycline, which has been proven not to be effective.

"We started a major research project in defining the disease throughout California and parts of Missouri and Kansas," Ganta said. "Independent of animals fed with antibiotic supplement, about 50-60% of all animals are positive for the disease. Farm practices, however, may make some difference in controlling the disease, but having a good vaccine is the best option for controlling the disease. We are the only research team working on it and developed the first protective vaccine."

"This is a truly outstanding paper that represents what I believe to be the greatest advance in anaplasmosis vaccine development in 50 years," said Hans Coetzee, study co-author, university distinguished professor and head of the K-State's anatomy and physiology department. "We are grateful for the opportunity to collaborate with Dr. Ganta's group on such an impactful project."

"Our work has been identified as 'very significant,' so we were able to receive support from an endowed fund managed by the California Cattlemen's Association," Ganta said. "In particular, this funding is by the Russell L. Rustici Rangeland and Cattle Research Endowment, which primarily supports faculty at the University of California, Davis. Due to our research's impact, the majority of the funding — 92% — came to us through a collaboration with a colleague at that university."

Ganta has been invited to share his research at the National Cattlemen's and Beef Association meeting in Reno later this month.