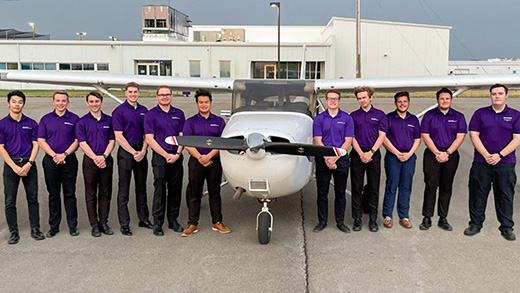 For the seventh time in the last 10 years, the K-State Salina Flight Team has qualified for the National Intercollegiate Flying Association Safety and Flight Evaluation competition. The event will be May 9-14 in Columbus, Ohio. | Download this photo.

After finishing among the top three schools at the Region VI competition in October 2021, the K-State Salina Flight Team qualified for the National Intercollegiate Flying Association Safety and Flight Evaluation Conference, also known as NIFA SAFECON. This year's competition, will be May 9-14 in Columbus, Ohio, and hosted by Ohio State University. Twenty-seven schools from nine different regions around the country also qualified for the competition.

"This experience is multifaceted for our pilot students," said Sebastien Joubert, K-State Salina interim chief flight instructor and the flight team's advisor. "They get to compete in their chosen profession and hone in on the skills that will make them successful in their careers. The other cool aspect of this competition is the comradery between the competing schools, where they get to interact and network with fellow pilot students, faculty and alumni from across the country. It's nice for K-State Salina students to explore beyond the bubble of their home campus."

The events at NIFA SAFECON 2022 will include flight and ground events that allow competitors to showcase different strengths in navigating their aircraft. The flight events will include competitions for accuracy in landings and navigation, while the ground events entail flight planning, aircraft recognition, flight computer skills and more.

K-State Salina has been successful at regional and national flying competitions. The flight team has qualified for nationals seven times in the last 10 years and won the event's Safety Award at the 2021 Region VI competition. In 2014, the university was awarded the prestigious Loening Trophy, presented to the outstanding all-around collegiate aviation program in the nation.

This will be the first in-person national competition since 2019 and the K-State Salina team members are eager to put their skills to the test, as well as provide the younger pilots on the team with experience in flight competition.

"We are able to go perform at and experience a national competition because of the hard work of everyone on this team," said Miles Denning, junior in professional pilot and team captain, Salina. "We really wanted to perform well in the regional competition last fall, so we decided as a team to commit two nights a week in preparation for the event. The effort of the team paid off with us winning the event's Safety Award and earning a spot in the national competition."

Eleven team members, all majoring in professional pilot, will compete for K-State Salina at nationals:

From out of country: Toshiki Nango, sophomore, Kyoto, Japan.