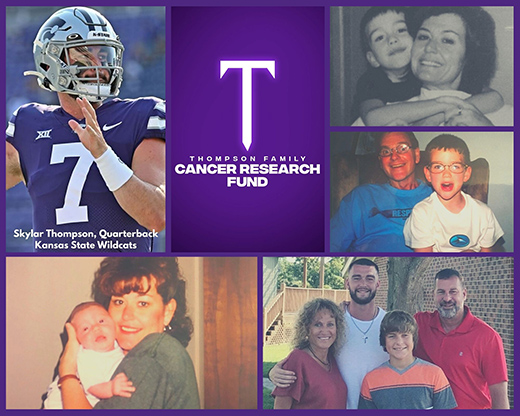 MANHATTAN — Miami Dolphins quarterback Skylar Thompson's goal for his last year at Kansas State University was to finish on a high note — and not just in football. He wanted to positively impact people by supporting cancer research at the university he loves.

In October 2021, Thompson and his family established the Thompson Family Cancer Research Fund for the university's Johnson Cancer Research Center in memory of his mother, Teresa Lynn Thompson, and grandfather, John Walter Thompson.

"They were two of the most influential and meaningful people in my life, and I had a really hard time wrapping my mind around those losses," Thompson said. "I now believe a big reason I've faced these challenges is so I can have the ability to impact others while honoring my mom and grandfather."

Thompson donated proceeds from the October sales of his "Stronger Together" apparel in recognition of Breast Cancer Awareness Month. He also used a personal email message and social media to invite K-State supporters to donate to the fund.

"I have a deep love and passion for K-State," Thompson said. "To be able to support a cancer research center at my university is very special to me. It means a lot to work with those so passionate about this cause."

Thompson is grateful for the extraordinary response from supporters. By January, donations to the fund totaled $21,590. Every donor received a thank-you video from Thompson and a letter from the center. In April, the Thompsons and former teammate Denzel Goolsby raised nearly $10,000 more with their fundraiser, A Night with Skylar Thompson.

"Thank you for your support, both throughout my years as a Wildcat on the football field and in this aspect of my life that means so much to me," Thompson said. "I have a great feeling that if my mom and grandfather knew what we are doing, they'd be very proud."

The funds allowed the center to offer two Skylar Thompson Family Cancer Research Awards in the spring to undergraduate and graduate students doing breast cancer research in the chemistry and kinesiology departments.

Thompson says that even though his time at K-State is over, he plans to continue supporting cancer research at the Johnson Cancer Research Center. A part of the College of Arts and Sciences, the center supports and advances cancer research and education at K-State. To donate to the Thompson Family Cancer Research Fund, go to givecampus.com/campaigns/23825/donations/new.