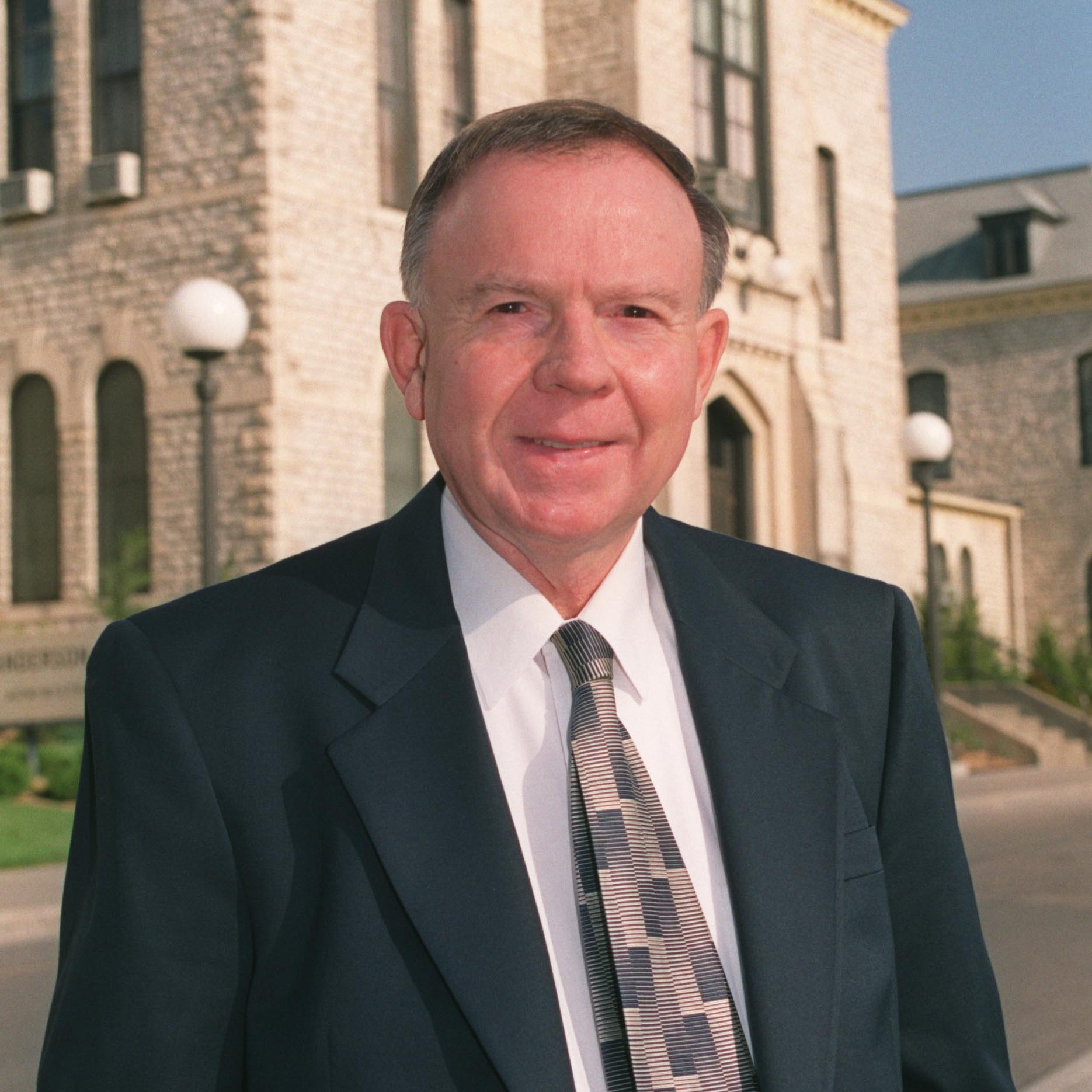 Jon Wefald, 12th president of Kansas State University, passed away on April 16. He served as president from July 1986-June 2009. | Download this photo.

MANHATTAN — Jon Wefald, Kansas State University's 12th president, who is credited with growing the university into a Top 10 land-grant university, died April 16 in Minnesota. He was 84 years old.

Wefald served as president from July 1986 to June 2009. At his inauguration, the chairman of the Kansas Board of Regents, Frank Becker, charged Wefald to “transform students into scholars and invigorate alumni and the citizens of Kansas." He did just that.

During his 23 years of leadership, the university added more than 2.2 million square feet of new buildings, including the addition to Hale Library, the Marianna Kistler Beach Museum of Art and the K-State Alumni Center. As K-State's president, he helped philanthropy increase from $6 million a year to nearly $100 million annually and research funding grew from $18 million annually to nearly $134 million.

This growth in research funding, along with the university’s burgeoning expertise in biosecurity and biodefense, positioned K-State as one of the nation’s distinguished research and doctoral universities. In 1999, Wefald and several university and legislative leaders wrote “Homeland Defense Food Safety, Security and Emergency Preparedness Program” — also known as “The Big Purple Book.” The book outlined the university’s infectious disease research programs and established K-State as a biodefense and agrodefense leader. This reputation, built under the direction of Wefald, was also critical in the U.S. Department of Homeland Security’s 2009 decision to name Manhattan as the home of the National Bio- and Agro-Defense Facility, or NBAF. Wefald’s efforts for the construction of the Biosecurity Research Institute on the Manhattan campus played an integral part in landing NBAF.

During his tenure, Wefald oversaw an increase in enrollment from around 16,000 students to more than 23,000. Also, during this time, K-State produced 125 Rhodes, Truman, Goldwater and Udall scholars — more than any other public university in the nation. Wefald Hall, a residence hall on the Manhattan campus, is named in his honor for his efforts to support students and student life.

Outside of academics, Wefald revitalized K-State Athletics, particularly with the hiring of Bill Snyder as football coach in 1989, who went on to lead K-State to two Big 12 championships and unparalleled national prestige.

Funeral services are pending and information will be available at a later date.

Kansas State University leaders and friends of the university offered their condolences to the Wefald family.

“I was deeply saddened to learn of former K-State President Jon Wefald's passing. Dr. Wefald's legacy is one of transformation, growth and a true passion for our great university. I am honored and challenged by the opportunity to share the experience of serving as K-State's president and will strive to honor the example he set through his service. Our condolences and thoughts are with his family and friends during this difficult time.”

“Jon Wefald led an impressive campaign that increased the number of endowed professorships and University Distinguished Professors at our university. His vision enhanced the university’s academic and research profile through these efforts, which also provided new opportunities for our students through access to some of the top minds in academia. His contributions have truly laid the path for K-State as the nation’s premier next-generation land-grant university.”

"President Wefald moved our school from very good to great, but most importantly, he made us relevant. His work made us proud to wear purple and to be a member of the K-State family. There simply is not an area of the university we all love that Jon Wefald did not impact – facilities, scholarships, champions on and off the field, private gifts and enrollment. We will miss his passion to serve, interest in doing what is right for K-State and his contagious enthusiasm.

I was honored to be one of his first appointments and took great pleasure in serving in his cabinet for his entire presidency."

“Jon was not only a very special leader of Kansas State University but also a wonderful husband, father, grandfather and friend. Jon was a major part of the reason we came to Manhattan. He was always so very determined to assist our program and all other programs – athletic and academic – to become the very best they could be. He and his wife, Ruth Ann, cared about people – students, faculty, staff and community – and were always seeking ways to be of help. Their commitment to the university is unparalleled. Sharon, Sean, and I, and our family are grateful to Jon for so strongly supporting our time here.”

“K-State lost a legend on Saturday. Jon Wefald was an extraordinary member of the K-State family, and our great university would not be what it is today without his outstanding leadership. He will be greatly missed."

“It is a sad day for Kansas State University and the Wildcat family. President Wefald helped transform Kansas State into what it is today and was the driving force behind elevating our university into one of the top land-grant schools in the country. His passion for athletics was also well documented, and his impact on not only our program but also the Big 12 Conference will always be a part of his legacy. He will be dearly missed, and our thoughts and prayers are with his family during this difficult time.”

"President Wefald created a lasting legacy at Kansas State University, and we are a better university because of his leadership. He was a passionate leader and a good friend to many, including me. Ruth Ann and the entire Wefald family are in my thoughts and prayers."

Division of Communications and Marketing
media@k-state.edu
785-532-2535