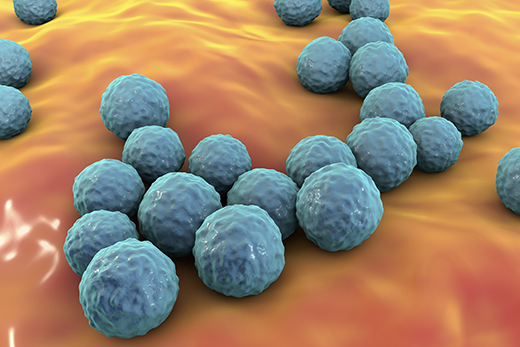 MANHATTAN — New research at Kansas State University reveals how probiotics may not be as beneficial for animal and human health as thought.

Probiotics, in most uses, are organisms considered to be beneficial for gut health in animals and humans.

Raghavendra Amachawadi, assistant professor of food animal therapeutics in the K-State College of Veterinary Medicine, and his team have discovered that a species of bacteria, Enterococcus faecium, which is contained in several commercial products for swine and cattle, can be a source of antibiotic resistance.

Their study, "Whole genome sequence analyses-based assessment of virulence potential and antimicrobial susceptibilities and resistance of Enterococcus faecium strains isolated from commercial swine and cattle probiotic products," was published recently in the Journal of Animal Science.

"Although probiotics are beneficial bacteria, some bacterial species can have unintended negative consequences," Amachawadi said. "Our research has shown that Enterococcus faecium carries genes that confer resistance to antibiotics widely used in human medicine. Feeding such products to animals raises the possibility that the genes can be transferred to pathogenic bacteria and make them resistant to antibiotics, which can be passed on to humans."

At this stage, Amachawadi said, this is only a theoretical possibility and there is no evidence of such transfer actually taking place in the gut and subsequent human exposure.

"Because use of antibiotics creates resistance in bacteria, which is a huge public health concern, producers are seeking replacements for antibiotics," Amachawadi said. "Most commercial probiotic products contain live bacteria that benefit the animal by improving the gut bacterial balance."

The findings from this study suggest that, in the future, probiotic products may need to undergo a test for antimicrobial resistance genes before they are marketed for use in food animals.

The study, funded in part by a grant from the National Pork Board, included researchers from the animal sciences and industry and diagnostic medicine and pathobiology departments at K-State, as well as the Center for Food Safety and Applied Nutrition division of the U.S. Food and Drug Administration at Laurel, Maryland.